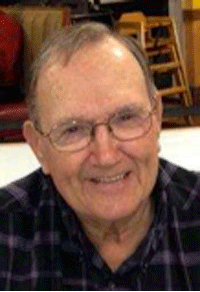 Dale Richard “Dick” Michael was born on Saturday, April 2, 1938 in Kansas City, Kansas. He was the son of Bert and Esther (Brewer) Michael. He was a long-time resident of Wellsville until his death at the age of seventy-four years. Dick graduated from Wellsville High School with the class of 1956; attended Pittsburg State University and later graduated from Baker University with a Bachelor of Science in 1962. Dick married Linda Lou Lederer in Miami, Oklahoma. Together they raised three sons, Rodney, Danny and Chad, and now have custody of nine year old grandson Dale.

Dick knew “NO FEAR” driving stock cars, flying airplanes and whatever was available to do. He gave the Wellsville community much enjoyment and excitement while driving at Lakeside Stadium and most of the time was winning for his team. He was an avid flyer helping his friends with their airplanes and flying with them. Sometimes four or five airplanes were in the sky at one time. He also flew Young Eagles.

A friend wrote, “Dick was a really good man and a great asset to our EAA Vintage Aircraft Association Chapter, he was the Chapter Treasurer. Dick was a wonderful friend to so many. He and I restored a Fly Baby over a 5 year period as a chapter fund raiser, brought it to Oshkosh last year and won a Bronze Lindy with it for workmanship. It was on display in the EAA Experimental hangar for talk about the early homebuilts from EAA’s roots”

“Dick was a VAA Chapter member and proud of it! He was an excellent pilot; so good that most of his peers called him “The Master”. He spent countless hours teaching young people to fly in his orange Luscombe (“The Great Pumpkin”) at no charge….ever. Most of these people went on to get their private ticket, and a few even bought Luscombes. I am sure that today in heaven, someone is being taught the finer points of taildragger flying by the Master. He was truly the type of guy that typified what EAA Vintage Aircraft Association members are like.”

Dick will be greatly missed by his family and friends.