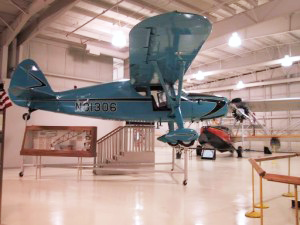 We continue to focus this newsletter section on airports around the country that are home to VAA or EAA Chapters who are making a difference in aviation. By that we mean they are taking an active role in promoting and encouraging young people to become more active in aviation related activities. This will be the twelfth organization featured. That alone should be encouraging to all who are interested in teaching young people the skills of flying and of aircraft maintenance and restoration. There are many more chapters and airports that are participating in this goal. If you are aware of a group that should be featured please let us know. In the future this article will also feature the stories of young aviators who are actively involved in aviation. Their story will be told from start to finish with the purpose being to encourage other young people to participate. One of the primary objectives of this portion of the newsletter is to show other individuals and groups a way of bringing in young aviators. We all talk about how concerned we are about the future of aviation but only a few do something about it. The groups that have been featured in this newsletter section are “doing something about the problem.” I hope that each of their stories will provide the impetus for others to do the same.

EAA Chapter 838 located in Racine, Wisconsin is our latest focus for “Airport Action”. This group is very active in promoting aviation interests and education to their community. They have over 160 members with a charter that clearly states their goals. Two of these are as follows: To foster, promote, and engage in aviation education and to encourage and engage in research for the improvement and better understanding of aviation and the science of aeronautics.

Chapter 838 was organized in 1984 led by Quinn Rench and a group of aviation enthusiasts. In December, 1987 the chapter embarked on an ambitious building project aimed at providing a permanent home. On March 9, 1992, the chapter held a ground breaking ceremony and began construction of one of the finest EAA facilities in the country. This building includes a classroom, a library, a hangar workshop, and the Southeast Wisconsin Aviation Museum and Hall of Fame. All of this is contained in an 18,000 square foot facility. 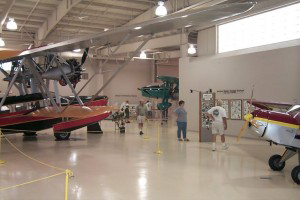 One of the programs that impresses me most about this group is their Young Aviators program. This active flying program has been operating since 2008. The Young Aviators program includes a week of hands-on flying, fabricating, and instruction to teenagers 14-18 who are interested in science, technology, engineering, and math. Daily flights with a professional flight instructor are offered along with similar sessions in a simulator. All of this allows the participants to log time toward their Private Pilot’s license. Also offered are daily workshop sessions that introduce the students to tools necessary to cut, shape, and rivet an airplane wing component. They also attend classroom lessons focused on the physics and chemistry of flight including navigation. Logistics currently limit the program to 12 kids per year. The cost is $2,500 per student, but local donations reduce the tuition to $795.

Along with the Young Aviator program the chapter also hosts an active Aviation Explorer Club. This is their “next step program intended to cultivate the initial spark and keep interest alive until they are able to actually join the Aviation Explorer Post at age 14. Explorer Post 218 is also sponsored by Chapter 838. And as if all of this was not impressive enough this group of Wisconsin aviators hosts a Private Pilot ground school each year. Education is obviously a top priority with Chapter 838. 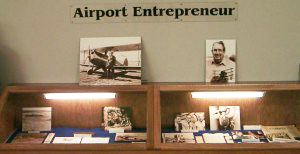 What about their museum? It too, is very impressive. A portion of the Johnson Wax corporate aviation history is presented in the museum through a replica of a Sikorsky S-38 amphibian that was used by Johnson to explore the Amazon Basin in search of carnauba palm. This was the source of wax for the company’s products. Along with this airplane was a 1929 Waco Taperwing that was also used by the Johnson Company as a marketing vehicle. These aircraft were featured in the museum until 2 years ago when the company moved the airplanes to the Racine Heritage Museum.

This museum contains stories of other local aviators and entrepreneurs such as Carlyle Godske who was a pioneer aviator, airport manager, and pilot trainer in the Racine area. Another early barnstormer featured is Pacific J. Landremann who attempted to set a world’s record in the number of parachute jumps in one day. A pristine Fairchild 24 has been restored and is proudly displayed in the museum. Many other aircraft and displays are present in this very unique museum.

To me it is very remarkable that an EAA Chapter has taken the initiative to bring so much aviation activity to their community. They are providing an example that others can follow. In addition to all of the programs and displays that have been presented they are also restoring a Piper Tri Pacer converting it to a PA20 Pacer. The more I learned about this chapter the more impressed I became. The leadership and members of Chapter 838 should be very proud of their accomplishments. If we would all follow their example in our particular area of the country we would not be worrying about bringing young people into aviation. It would be happening as I am sure it is in Racine, Wisconsin.