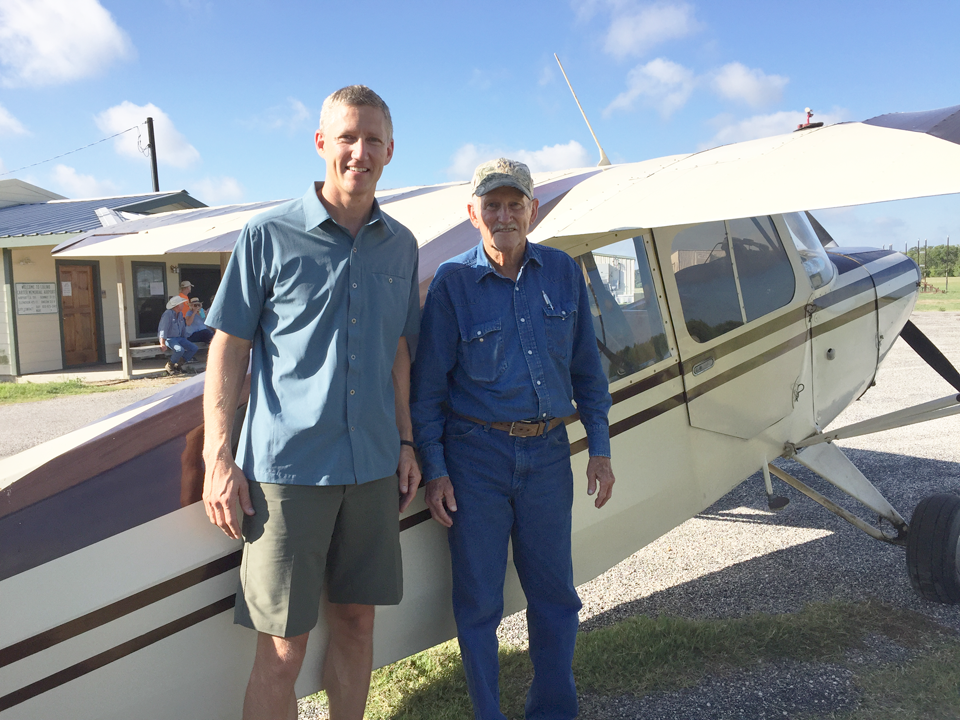 by Priscilla A. Crawford 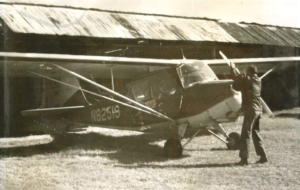 One day after his 80th birthday on August 19, J.E. Stuart received a surprise visit and was provided with a day that will be remembered and talked about for a long time. In considering ideas for their Dad’s birthday, Stuart’s daughters, Kathleen Stuart and Kara Barber, had looked through old photos and had found one of Stuart as a young man propping his Aeronca Champion airplane, nicknamed The Champ.

Stuart’s daughters then got to work. The numbers written on the plane were run through the Federal Aviation Administration (FAA) registry which brought up the current owner’s name. After entering the name in Google, the owner’s contact information popped up within seconds. Stuart’s daughters contacted the owner, and learned that he is a pilot and a flying instructor. He offered to fly the plane from his hometown of San Angelo to Luling the day after Stuart’s birthday. With family members and friends watching, when Stuart arrived for his surprise at the airport on the designated day and saw the airplane, he noticed the number on its side immediately and remembered it well. Although the airplane had changed its appearance having been painted and restored by the present owner, Stuart appeared to feel comfortable as he climbed into the cockpit to take it for a spin with the owner seated behind him. Family members and friends were present to cheer Stuart on his flight.

Stuart’s days of glory in flying began when he was fourteen growing up on a farm out of Pettus, Texas. He worked the farm during the summers while his Dad worked in the oil field. In addition, Stuart also found part time work driving a tractor on a couple of farms where ex-war pilots lived. Both farm owners were crop dusters who would take Stuart up in their planes and let him handle the controls. Soon, Stuart’s love for flying prompted him to take flying lessons at the Beeville airport.

Not having a driver’s license, Stuart rode his motor scooter to the airport where he could afford only a half-hour lesson at $3.75 each time. Although the pilot course was twenty hours, after six and a half hours, the instructor told Stuart he needed to go out and fly by himself. Stuart was eager to fly solo and at the age of fifteen, began to take solo trips to other towns, building up enough hours of flying time to enable him to carry a passenger. To fund his pilot expenses, Stuart would fly to several towns to work in an oil field. Describing his work, Stuart said that his oil field work included using an ax to chop brush out of roadways. Demanding work was not daunting to Stuart whose growing fondness for flying nudged him onward to achieve his private license at the age of seventeen. 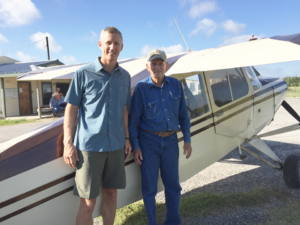 Hard work and a busy schedule did not prevent Stuart from having a bit of fun in his plane. For sport, he always wanted to do something exciting. In those days, one could find toilet paper in colors and Stuart would buy the bright pink rolls. While flying over the countryside he would throw the paper out of the window of the plane and let it in his words, “string out real pretty,” then cut back through it and cut the paper to pieces. He thought that the people below must have wondered what was happening, but no one ever complained. On weekends, Stuart would fly with a friend along to Cedar Bayou on Matagorda Island. As he described it, they would “slip in and slip out to fish.”

The military base on the island sent out pilots to practice dive bombing with “dummy bombs” in the restricted area where Stuart and his buddy would fish, but they left the boys alone. As described by Stuart, the bombs “wouldn’t explode, they just shook the ground.” Left to their fishing, the boys would tie rods and reels on the struts of the plane and put their caught fish into tow sacks to be cleaned at home. Another thrilling event occurred on a flying trip to the Luling area where Stuart planned to look for a job. At the beginning of his journey when near Chase Field north of Beeville, Stuart crossed into a restricted area. Two trainer jets buzzed him and then flew beside him as they zoomed past. As they flew by, Stuart gave them what he called “the peace sign.”

Stuart bought his first airplane and purchased it by working for an oil company checking pipelines. Learning that he didn’t have any money, the company offered to finance him one of their older planes for $50 a month, which was his salary for the month. The Aeronca Champion plane he bought cost several hundred dollars and was paid for in a matter of months. By this time, Stuart was sixteen. On one occasion, one of the wheels came loose when he took off and the wheel folded up. When Stuart landed he held the plane on one wheel, then the plane fell on the other wheel and went up on its nose. Although the plane was damaged badly, Stuart bought used parts, a propeller and landing gear, and repaired the plane himself. After turning seventeen, Stuart went home one day to find that his parents had sold his airplane because they were worried about its condition and about his flying a plane with needed major repairs. Stuart had made some forced landings in the plane because of engine problems, but he claimed, “I didn’t tear it up.” In one such incident, after takeoff Stuart related, “too many spark plugs fell out and the motor died,” causing him to have to land in a cornfield.

In the late fifties, Stuart attained work at Luling Oil and Gas where he divided his time working and flying between Luling and Rockport, sometimes spending up to two months in Rockport. Without his own plane, Stuart would rent a Piper Cub from the manager of the Luling airport. When in the Luling area, Stuart traded at stores and filling stations in the town. Through frequenting places in the town, he met and began to date Delma Lee Crawford. It wasn’t long before he would take Crawford flying, and she loved it, not balking at all when he would go into spins and loops. She especially enjoyed flying over the clouds where Stuart remarked, “The clouds looked like snow country.”

In 1958, Stuart and Crawford married and later had two daughters, Kathleen and Kara. In the early sixties, Stuart and his good friend Dickie Bateman, bought an Ercoupe plane together, purchasing it in Freer and hauling it back on a trailer. The two friends had also purchased another Aeronca Champion, also nicknamed The Champ. Bateman along with Stuart had also obtained a solo license. By this time, Stuart had earned his private license and for the most part would pilot the plane when flying with Bateman. Eventually, the two friends sold the Ercoupe, and Stuart kept the Aeronca Champion, the plane that was the highlight of his birthday celebration this year. After buying the Aeronca Champion, once the daughters were old enough to sit up in a plane, he would strap them together into a one-seater behind him and off they’d go. Sharing his flying skills, Stuart would often take turns flying family members and their kids for a spin around the countryside. 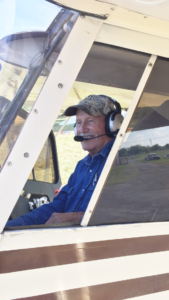 Sometime in the sixties, the Stuarts bought a house on the San Marcos highway that had 15 acres of field behind it. Borrowing a road grader, Stuart created in his words, “sort of a landing strip.” Stuart would land the plane behind his house but also continued to use the Luling Airport. Eventually, he sold The Champ to a man at the San Marcos airport, and about fifteen years ago Stuart went to Florida with a friend to buy another plane.

The two friends took turns flying the plane back to Luling. As Stuart was taking a turn, they ran into severe weather, and he had to put the plane down in Georgia. Flying over the Mississippi River, Stuart remembered how wide the river looked from the air. Later, the plane flew through the restricted area of a military base, and one of the military planes buzzed them. Asked if that scared him, Stuart said “Naw.”

At seventy, Stuart retired. He had owned and operated a successful business, Stuart Welding and Machine Works, for over forty years. Around the same time, Stuart sold his last airplane saying, “Figured I’d been lucky enough. When younger, I was indestructible; when old, I am fragile.” In addition, times were changing, and liability insurance had increased its prices significantly. As Stuart said, “In the old days if something happened with your flying a plane, it was just an accident. Now, it would be a lawsuit.”

Stuart does not know how many owners the plane had, but to be sure, The Champ fell into the very capable hands of the present owner, Brent McCasland. Flying from San Angelo to Luling, McCasland brought along his eight- year-old son who is following in his father’s footsteps by learning to fly. At the airport, Stuart and McCasland hit it off from the beginning as they chatted with one another avidly. Stuart examined every detail of the plane while the owner provided specific information about the redoes and improvements he had made. As a family member noted,

The Champ seemed to have “taken on a life of its own,” as it is still existing and it is viable after all these years. The plane, through the ownership of others throughout the years, has avoided a landfill somewhere and has remained steadfast and is functioning as vibrantly as it ever did. Every pilot who owned the Aeronca Champion must have had unique stories, but none could top the tales of a kid with a strong work ethic, daring spirit, and passion for flying. How meaningful to be a part of a very special day when Stuart soared the skies once again with