A PILOT YOU SHOULD KNOW: Chris Thomsen

by Vintage Aircraft Association | May 29, 2017 | Pilot You Should Know 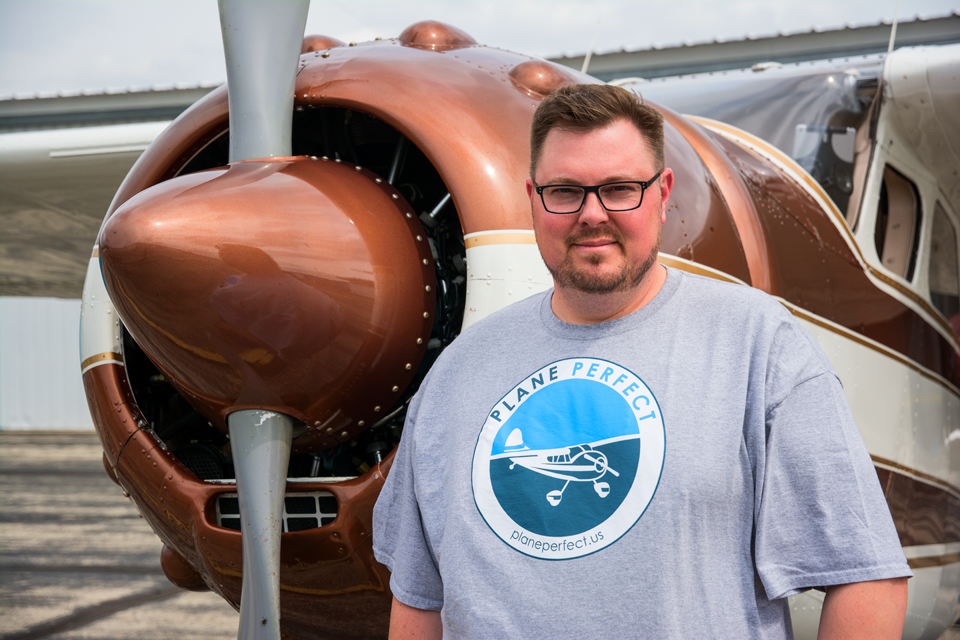 I sat down with Chris to interview him having only known him from the handful of emails we had exchanged. We quickly got into an awesome conversation about not just his history with 31N, but about flying, our favorite AirVenture experiences and life in general. What felt like 20 minutes was actually two hours! I know all of you have had many similar experiences so I will apologize in advance for the following story being much shorter than it could be.

Chris and I both share common ground with Oshkosh as it is the root of where our interests in aviation were started. While I only attended the airshow every summer, Chris actually grew up in the country on the northside of town. His grandparents would host pilots at their house which allowed him extra enjoyment of the airshow. This was when there was a second flightline that the public didn’t have access to and the pilots staying at the family home would set him up with the credentials to gain access. The visiting pilots also provided scanner frequencies so Chris could listen to the airshow pilots. The location of the family farmland was such that when the warbirds would form up before their massive flyovers, it was right over his house. Chris recalls, “I would lay in the grass in my yard and listen to the pilots as I watched them fly overhead. I always wondered what it would be like to be one of them.” 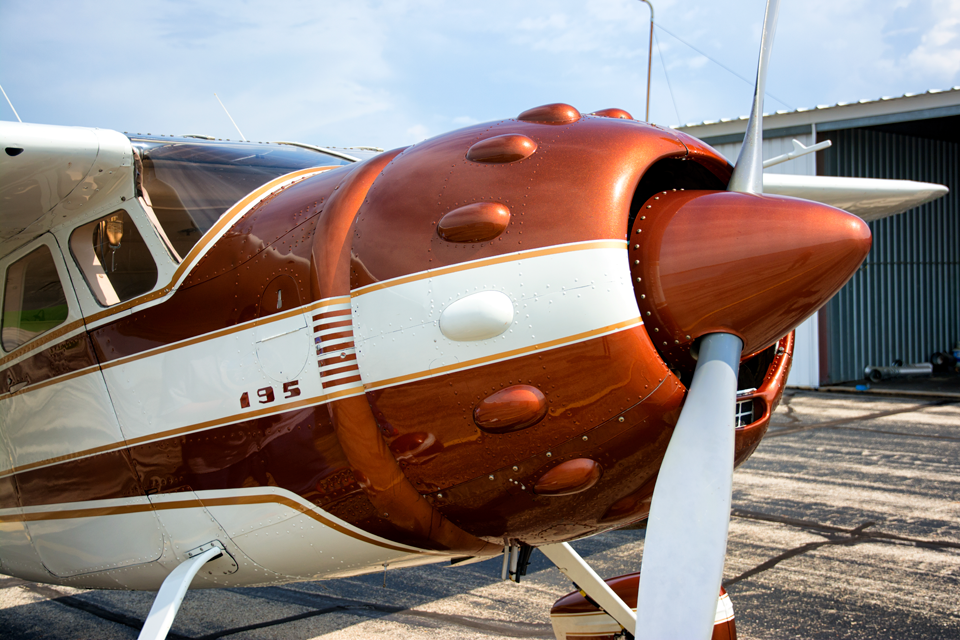 Back at the show Chris’ mom would buy him a ticket to ride in the co-pilot seat of a 1931 Stinson Tri-Motor that was giving rides. To this day he remembers how it felt stepping into the Stinson, “You know how old things have a smell, this Stinson had that old airplane smell. I remember everything in that cockpit; the wooden yoke, where the mags were…” He would continue his tradition for a few years and it would go on to impact his future as a pilot.

The interest in aviation never left Chris. When he graduated from high school he joined the Navy where he worked in aviation. Earning his certificate came after the Navy when he was working for Boeing. The catalyst was when he went for a flight while visiting some friends in Seattle. They chartered a Beaver on floats to Friday Harbor for lunch. The experience of that old round engine and flying right on top of the water was so cool it immediately made him want to learn how to fly. Chris explains, “I went home and it was the total indian summer thing going on; it was October and still 80 degrees. I looked at the sky one morning and just decided to drive to the airport. I walked into a flight school for a discovery flight, started a week later and had my certificate a little over 2 months doing it on weekends.” Even though he obtained his certificate quickly, Chris waited a while before purchasing his own airplane. Growing up he hung out with the Winnebago flyers and mentions he had a lot of fun with the club. 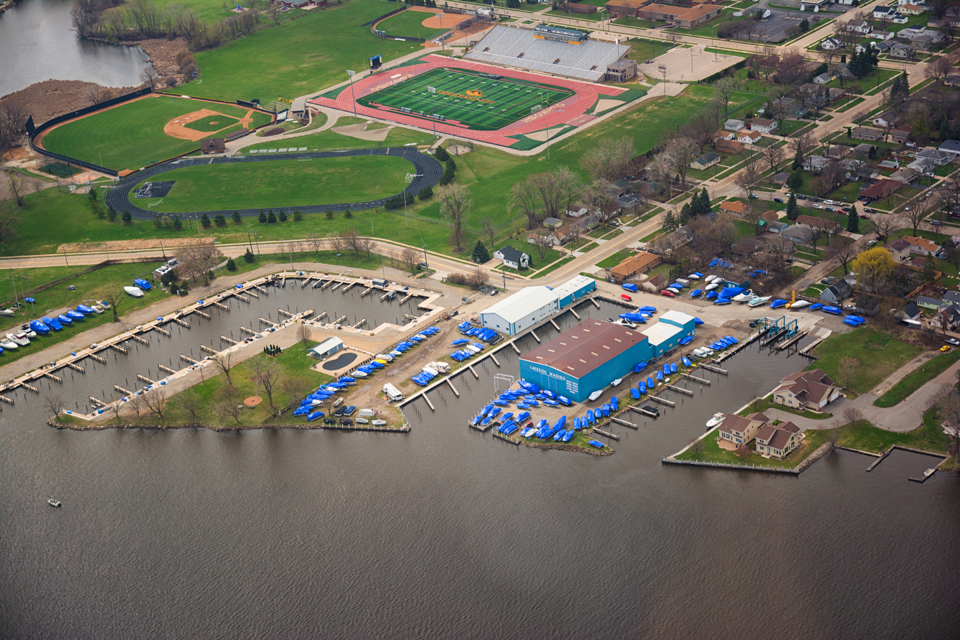 Oshkosh from the air in a Cessna 195

After relocating to the Chicago area and remembering how much fun he had with the Winnebago flyers he joined a local flying club. Within two months he was on the board and then shortly after became it’s President. Chris mentions, “The club experience is not just flying, but the maintenance side as well, that sparked my interest in ownership.” At the same time he also had a wife and two children that he wanted to share flying experiences with. “We were outgrowing the Piper Arrow and I knew I had to make a choice; either rent and fly for breakfast by myself, or buy something we could all enjoy.”

Growing up Chris lost his father at a young age. His mother worked and at age 12 Chris found a second home shooting trap and skeet at the Oshkosh Gun Club. Sometimes he would even skip school to hang out with the retired guys that frequented the club. The experiences we talked about were invaluable Chris remarks, “They taught me a great lesson about time, and how it moves faster than we realize. Because of this I have kind of lived life in reverse, trying to have as many unique experiences with my family while we are able and healthy.” 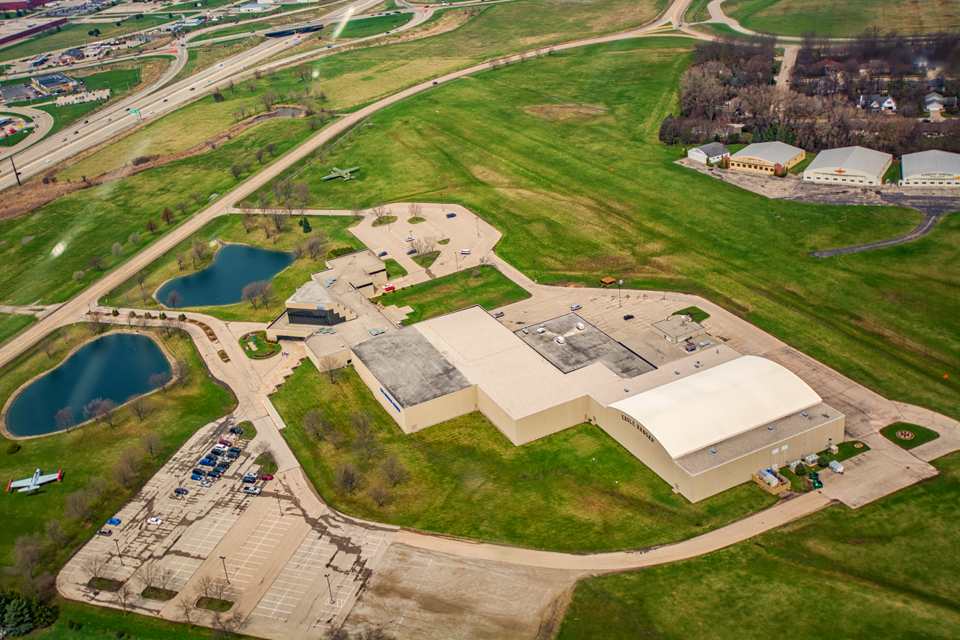 EAA Headquarters and Museum as seen from the 195

So when he listed all of the things he wanted in an airplane, it had to be something that was large enough to take his family on longer trips, fly IFR and VFR, do grass strips as well as concrete…and being an old car guy, it had to be cool! What came from that equation was a Cessna 195. He recalls that the International Cessna 195 Club and it’s President at the time, Coyle Schwab, were big helpers in his decision as well. “Everyone in the 195 Club is so welcoming and really made the decision for me.” When he stepped into a 195 for the first time “I walked up to the cockpit the same way I did in that old tri-motor Stinson and the smell – it was the same as when I was a kid. I was hooked. I had one 2 months later.” Chris is now a board director with the 195 Club.

You’ll notice the word experience comes up a lot in this story and that’s not a coincidence. Chris reminisces about hanging out with the retired guys at the gun club; “Older people will tell you; just do what you love, But what does that mean? My advice is to have as many experiences that you are interested in and chase those interests from a young age. That’s one of the greatest benefits of EAA, is that it brings those experiences to you.”

(Ed. NOTE: If you have a Vintage pilot you think we should know, send us your article and photos or contact Connor here to have him interview your favorite Vintage pilot.)