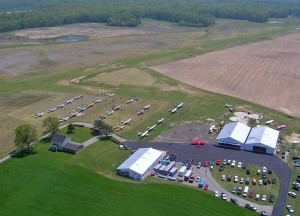 It is amazing to me just how many so called “grassroot” airports there are around the country. Most of them focus on antique and classic airplanes. The dictionary refers to the word grassroot as being ordinary or common. It also mentions ordinary people. With that in mind, I would define a grassroot airport as one that is accessible to all people and one that is built by and staffed by people who really care about the origin of aviation and how to preserve aviation history. A grassroots airport is one that does not have a fence around it keeping the public out. It is one that allows people to get “up close and personal” with the airplanes in a safe manner. It can also be called a living airport reminiscent of rural airports of the past. Basically, it is a small community of pilots and aircraft owners who love their airplanes and want to share their love and enthusiasm with other people including both pilots and people who are not pilots. One such airport that exists today and meets these criteria is Massey Aerodrome. Massey is located on the eastern shore of Maryland. The town of Massey, MD is roughly three miles East of Route 301 on the Wilmington- Annapolis corridor. It is well-marked along the highway as well as shown clearly on the Washington Sectional.

Massey Aerodrome was the dream of Founder and longtime Vintage member Jim Douglass. Jim wanted to establish an airport museum that would help keep grassroots aviation alive – just as it was when he was a young boy. He and his father had owned a V-77 Stinson Reliant for many years and Jim flew this airplane as a young man. Jim was drawn to old airplanes largely because his father owned several different airplanes from a Meyer’s biplane to the Stinson. As Jim grew older he had a dream of developing a grass strip that he and others could enjoy. Finally, in late 1999 and into 2000, his dream became a reality when he found an old farm for sale with enough acreage for a 3,000 ft. x 100 ft. grass landing strip. The property even allowed for a crossing runway that is 1,100 ft. long. Beyond that the farm had a number of old buildings that had been used to house farm equipment for years. Jim figured that these buildings could be used for aircraft restoration work.

Jim Douglass gathered together a group of investors and the airport became a reality. It was named Massey Aerodrome with the FAA designation of MD1. The runways were opened in 2001. As the project gathered momentum it was also named the Massey Air Museum with the stated goal of preserving grassroots aviation. The museum and airport are operated just like one of the thousands of small town airports that existed during the 1930’s and 1940’s. Massey Aerodrome has a nice collection of old aircraft most of which are regularly flown. Some of the airplanes include a 1941 Stearman and a 1939 Piper Cub that was restored as a “Hack Plane” used by the Navy and Marine Corps in the early days of WWII. This particular Cub replicates the plane that was assigned to the Norfolk Naval Hospital during that time in history. In addition, there is a 1957 Piper Pacer that has been a two time award winner at AirVenture for best aircraft conversion.

Many other airplanes are located at Massey Aerodrome including an Aeronca Champ, a Bucker Jungmeister, a 1957 Cessna 172 that has been completely restored and a Smith Mini-Plane. Other aircraft are hangared on the field including a Husky and a Cessna 170. All in all, a great cross section of antique and classic airplanes.

The museum building holds quite a collection of aircraft memorabilia donated by those who want to keep the memories alive for the next generation to learn from and to enjoy. It also houses a very nice library that is being set up by a group of volunteers. All of the books in the library were donated by families who are connected with aviation history. 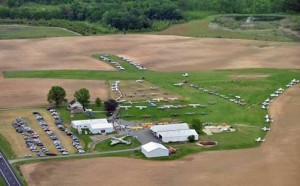 Massey Air Museum hosts two major events each year along with many smaller gatherings. Their big event is a Chili Festival held this year, 2013, on May 11th to welcome in the spring flying season. When the weather is good they can expect 150 or more planes to fly in from all over the East Coast, and 300 to 500 people will drive in for the event. Included among the drive in crowd will be numerous hotrod clubs, sport car enthusiasts, and motorcycle clubs who come out to enjoy the spring weather. They also will enjoy the great chili brought in by the folks attending. Massy Aerodrome has a wonderful Christmas Party on the first Sunday of December, again a Pot Luck type of meal brought by those attending. This is always a grand feast as well as another fantastic fly-in event.

Unfortunately, the founder of Massey Air Museum, Jim Douglass, passed away earlier this year. As one of the volunteers Ralph De Groodt stated “ Jim’s loss in February of this year has been quite a blow to the Museum but the Volunteers who make the organization work have pulled together, as only dedicated people can do, to support a dream they all are a part of.” I am sure that after reading about this small airport and the people who make it up you will agree with me that Massey Aerodrome is in every sense of the word a “grassroots airport”. Please visit their website for more information and photos of people and planes. They also send out a newsletter. The website address is www.masseyaero.org. Pay them a visit when you are in the Maryland area. I feel very confident that you will be made to feel most welcome. (Thanks to Ralph De Groodt and William Dougherty who provided information for this article).