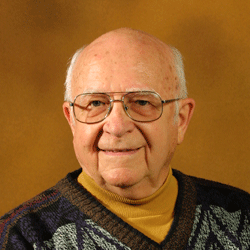 Gene was born September 6, 1924 in Casper, Wyoming, however the family moved to Scottsbluff, Nebraska in 1930 and Gene considered Scottsbluff his hometown.

In 1958 the family relocated to Tulsa, Oklahoma where Gene continued his professional flying career with Standard Oil of Indiana’s Service Pipeline organization flying their executives throughout the country in Douglas DC-3s, A-26s, Beech 18s, etc.

During the family’s nearly 15 years in Tulsa, Gene, Dorothy and family completely embraced the corporate and sport aviation groups and culture; they became the dominant couple in the local sport aviation field. They together wrote and distributed the grassroots aviation communication piece “Spit and Wire” and they planned and organized the many sport aviation fly-in events. During this time, Gene acquired and restored an airplane out of the 1920s, a Church Mid-Wing which currently resides in the EAA Museum at Oshkosh as does his personally-restored Davis D-1-W. Gene also acquired and restored a 1935 E-2 Cub which resides in a St. Louis aviation museum. 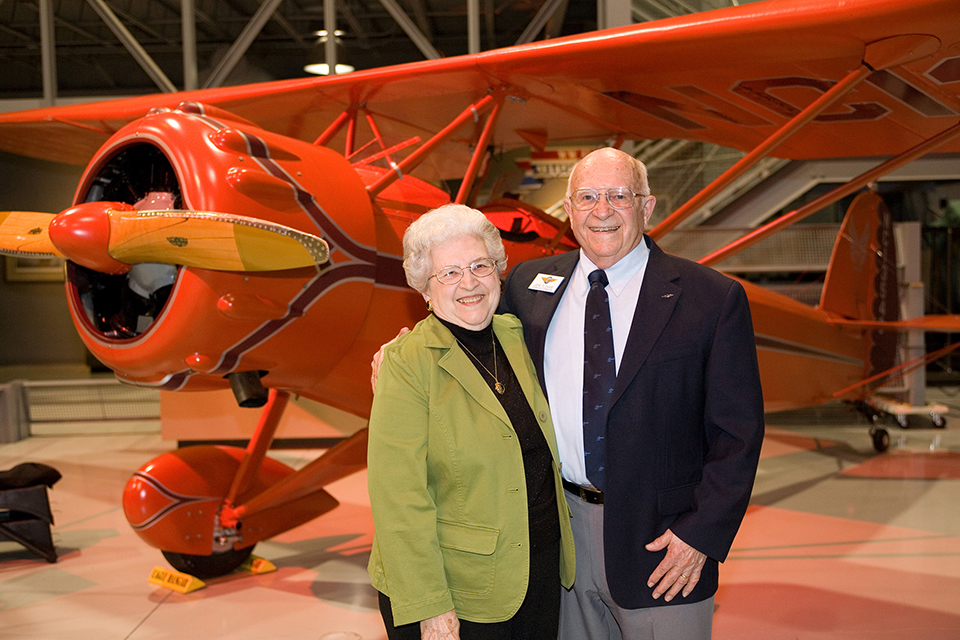 Gene’s sport aviation leadership activities in Tulsa were so outstanding he and Dorothy were invited by EAA President Paul Poberezny to join the select staff of the rapidly growing Experimental Aircraft Association of Hales Corner and later Oshkosh, Wisconsin. They accepted and in 1973 Gene became Associate Editor and later Editor of EAA’s Vintage Airplane magazine while Dorothy became secretary to Buck Hilbert, Vintage Aircraft Association President. Their involvement within the EAA and Oshkosh area community was total, professionally, socially and culturally. They supported EAA in every way possible. Gene’s 14 year professional career with EAA was one of major distinction. He became one of EAA’s most highly regarded and well known good will ambassadors; he was regarded as one of EAA’s most congenial leaders. He flew 353 different types of aircraft, many of them experimental. Gene accrued 7,722 hours of flying time over his 68 year active aviation career. He and EAA President Paul Poberezny were the only two EAA professionals to fly the prize-rare EAA North American XP-51 which is one of the first three XP-51s ever built.

Gene was carefully selected to participate and fly in the historic 1977 EAA 50th Anniversary Charles A. Lindbergh Spirit of St. Louis multi-city tour of the USA. The Spirit Tour Stop which came to Tulsa in late September of 1977 not only involved thousands of spectators seeing the Spirit on display and being flown, but also doing the first touchdown honors of opening the then brand new east-west runway at Tulsa International Airport; a very unique and emergency invitation after a special non-stop NYC to Tulsa 747 flight with high American Airlines officials and Tulsa political dignitaries aboard to do the runway opening honors had a mechanical in NY and could not depart New York City. Gene was flying the Spirit, of course. The next day, September 29, 1977 at the Tulsa Fly-In at Tahlequah, Gene flew the then Oklahoma Lt. Governor, and later Governor, George Nigh who had arrived right behind us in the State of Oklahoma King Air. We invited him to go fly in the Spirit and he jumped at the chance … good days!

Gene’s gifted special piloting abilities were so recognized that among others, he flew Jim Younkin’s treasured Travel Air Mystery Ship at Oshkosh on public demonstration fly-bys.

Gene’s reputation as a master airman was further enhanced when in 1971 he managed to save himself and a young EAA Oshkosh Convention passenger when the “only one in the world” Grumman civilian model 2-place F3F-2 suffered an inflight engine compartment fire. Gene had previously briefed his young EAA Oshkosh selected passenger in the most precise manner possible on exactly how to leave the airplane if they should have an airborne emergency. When the engine compartment fire took place at 6,000 feet, Gene told the passenger to leave the airplane, which he successfully did, Gene followed as soon as possible. Both men survived although Gene suffered major burns and was hospitalized for several days. Gene’s completely thorough briefing and instructions unquestionably saved the young passenger’s life, as well as his own — a master airman.

Gene and Dorothy Chase lived an exemplary life. They were a perfect match as a couple. Their personal, social, cultural and professional lives were beyond even those of a highly successful couple, they were a model couple and an ongoing inspiration to all who knew them.

When Gene’s health began to slowly diminish in 2011 Dorothy, in consultation with the daughters, made the correct decision for them to move back to Tulsa from Oshkosh where she would have the additional family support and care that would be needed and available from the medically-oriented daughters residing in Tulsa. The move was made and Gene received wonderful care in his last years. Gene and Dorothy celebrated their 70th wedding anniversary on August 15, 2016, a heartwarming family affair; both were destined to expire less than five months later.

Gene’s sport aviation achievements were far beyond exceptional, they reached the level of true greatness; his personal reputation impeccable. His loss to the Chase family, to his friends and associates, to aviation, to EAA and VAA, and to the world is immense. Where do we get such men? How do we deserve such men?

Gene Chase was memorialized Saturday, January 7, 2017 at the University Village Stovall Theatre, Tulsa, Oklahoma, but Gene Chase will live on in our memories the rest of our days.