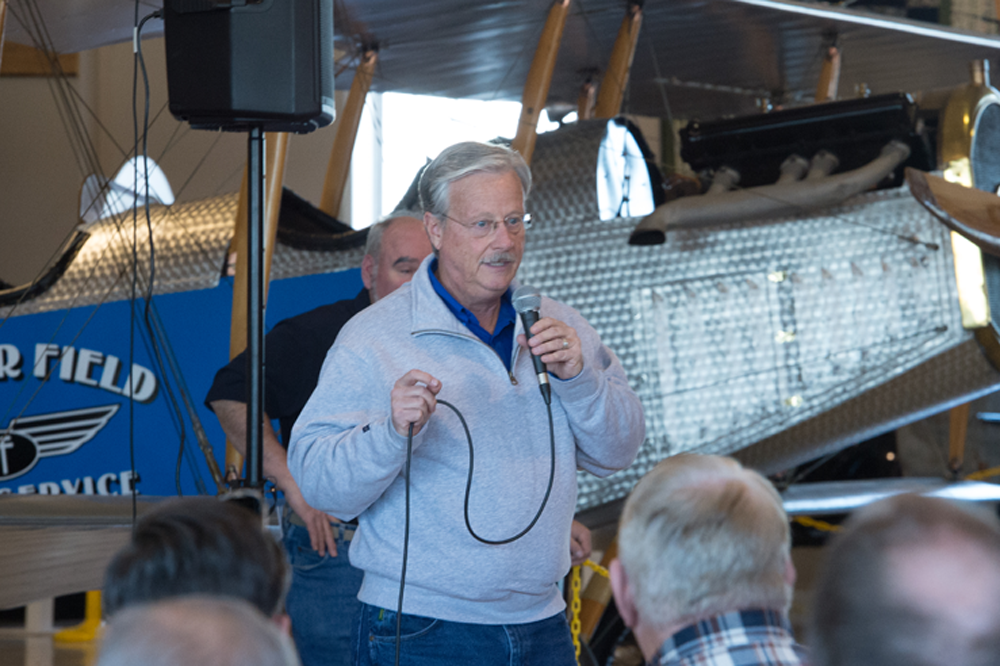 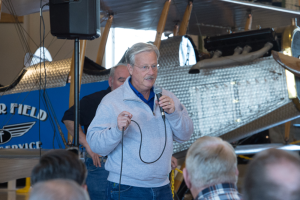 EAA Chairman and CEO Jack Pelton spent more than an hour addressing members’ questions and concerns. Click on the image or any image below to view full size.

Williamson, GA, March 3, 2016 This past weekend, EAA President Jack Pelton traveled to Peach State Airport to host an EAA Vintage Aircraft Association Town Hall Meeting. Peach State Airport (GA2), is located just south of Atlanta, Georgia and is the home of Candler Field Museum. The airport has been an antique airplane haven for a number of years having opened in 1967. The airport is centrally located in the southeast region. It is an extremely active experimental, antique, general aviation, and warbird airport that regularly attracts a large number of airplanes and pilots. This past weekend was no exception. Over 50 airplanes traveled from points throughout the southeast to participate in the Town Hall Meeting. 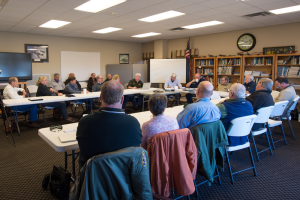 The Vintage Board of Directors conducted their winter business meeting from 9:00 to noon. One highlight of the meeting was an update on the permanent pavilion facility being constructed for Tall Pines.

Earlier in the day the Vintage Aircraft Association held their winter Board of Director’s meeting at the museum. Board members from all over the country were in attendance for this important meeting that included planning for AirVenture 2016. Mr. Pelton also participated in the board meeting along with several VAA members. The Vintage board decided to schedule a winter meeting away from Oshkosh in order to better connect with its membership. In the board’s opinion, hosting a meeting in other locations will allow the Vintage leadership to more closely align goals with member comments and suggestions.

Board members took a break during their business meeting to observe the Candler Field Youth Program in action. The program currently has approximately 30 young adults between the ages of 14 -20 who are provided the opportunity to learn how to restore and maintain airplanes in addition to being given an opportunity to receive flying lessons. The program is based at the Candler Field Museum and works in conjunction with the Candler Field Flying Club. This too, is a very active group of about 75 members who have access to four club airplanes. Vintage members were able to see these young adults doing restoration work under the supervision of their mentors. 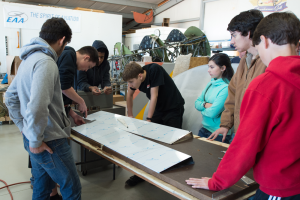 Members of the Candler Field Youth Program demonstrate their restoration skills for Vintage board members and guests.

Museum policy is one of ensuring that the members of the youth program can actually earn flying time toward their pilot license. They want them to actually have some “skin in the game” so to speak. They are not given anything although they do have a scholarship program in place for aviation career oriented youth who have demonstrated a need. The kids actually earn flying time by working on museum restoration projects and by fulfilling other needs of the museum. When a member of the program works 10 hours on a museum aircraft project or other museum task they are awarded 1 hour of flying time in a club airplane. More on the Candler Field Youth Program here,

After the morning VAA board meeting, the group ate lunch at Barnstormer’s Grill, an appropriately named restaurant located within the museum. Many VAA and EAA members flew in early for lunch. We could not have asked for a more perfect weather day – temperature of 60 degrees, clear skies, and light winds down the runway. Just right for a fly-in. 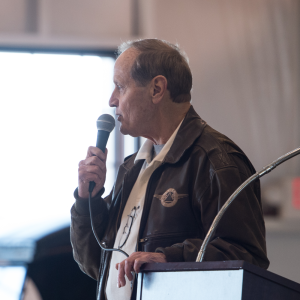 At 1 PM, Peach State Airport owner Ron Alexander opened the meeting and introduced Geoff Robison, President of Vintage Aircraft Association. Geoff and board member Dave Clark discussed a few issues pertaining to VAA. Geoff then introduced Jack Pelton who presented the group of EAA members and guests with an update on important issues pertaining to our industry. Included in his remarks were updates on medical reform, ATC privatization, the newly required volunteer requirements, and a number of other items. He then spent at least an hour answering questions from the audience. Geoff Robison joined Jack in answering some of the questions. After the question and answer session a short reception was held in the museum hangar – a replica of the American Airways hangar that was originally located on the Atlanta Airport. 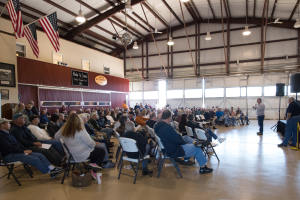 An overflow crowd of more than 100 people welcomed Jack. This fly-in drive-in event also brought more than 50 aircraft to the delight of members and guests.

During the event a drawing was held with the grand prize being a flight in the museum’s original Curtiss JN-4 Jenny. This fully restored 1917 airplane is regularly flown at Peach State. It was very fitting that EAA and VAA member Pat Blake win the prize. 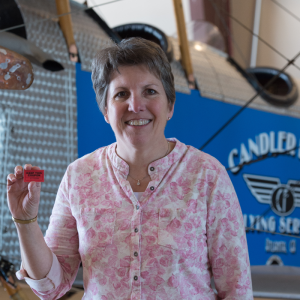 Pat and her husband Phil traveled from Albert Lea, Minnesota to attend the VAA Board meeting. She is a long time EAA and Vintage volunteer working tirelessly at each AirVenture. The flight took place later in the day and an excited Pat was more than thrilled to fly in this historic aeroplane.

The EAA and VAA members from the southeastern part of the United States who attended this event were most appreciative of the fact that Jack Pelton made the effort to travel to be with them and to update them on pertinent issues. They were also pleased that the Vintage Board of Directors traveled at their own expense to the Atlanta area to reach out to their membership. It was a great day in Georgia for aviation enthusiasts.