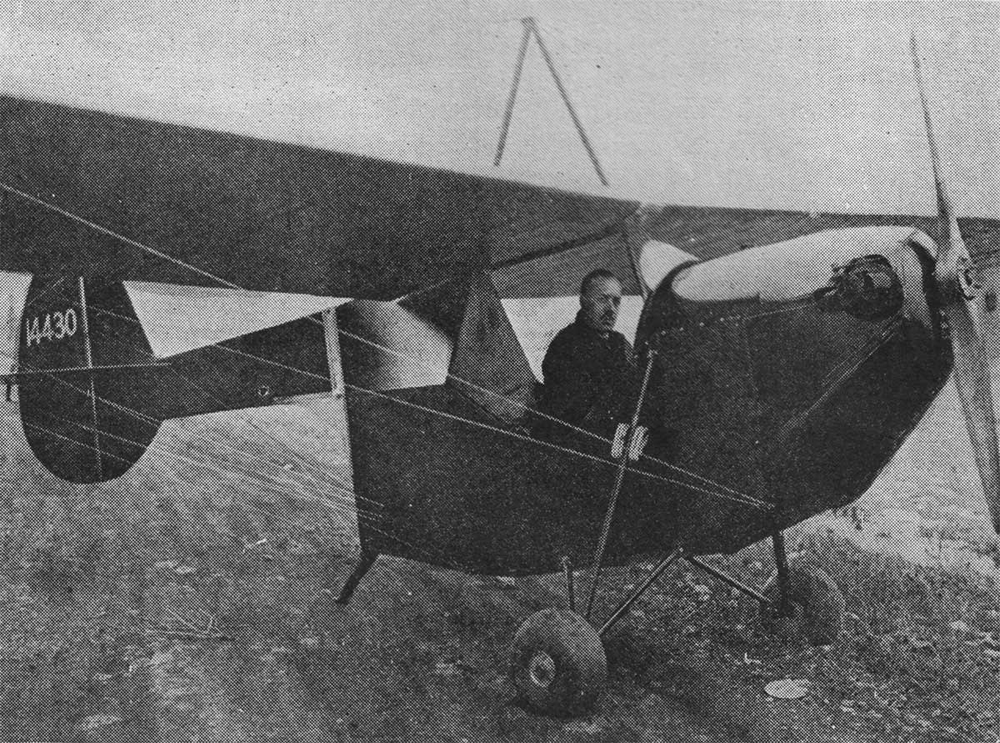 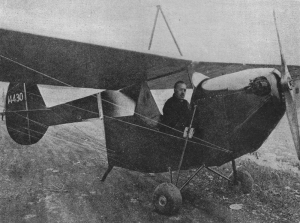 The December Mystery Plane proved to be no mystery for a number of VAA members, the first coming from Tim Cansler who identified the aircraft as the National Airplane and Motor Company’s Bluebird LP-4.

Other correct answers were received from Ulrich Rist, Jim Grant, Pit Ross and Wayne Muxlow. Amazingly it also turns out a Bluebird is under construction by Tim Talen who has restored scores of award winning aircraft and was recently inducted into VAA’s Hall of Fame. Read what Tim Talen has to say about the Bluebird—and don’t be surprised if you see a trophy winning Bluebird parked on the flightline at AirVenture a few years from now.

I first became acquainted with the Bluebird design when reading up on Montana’s aviation history. While little is written about the Bluebird it does appear that it was the state’s first and only “production” aircraft built in Billings, MT during the mid-1930’s. But the story really starts a few years before that with a cute little light airplane called the American “Sunbeam”.

This design came out of the Los Angeles, CA area and was powered by the also diminutive Salmson 9-cylinder radial engine. It was a serious enough of an effort at mass production to at least get a Group II approval and possibly two were built as model LP-1’s (NC930Y and 956Y–s/n 1 & 2). For unknown reasons the company moved to Tulsa, OK and built a third LP-1 with registration NC11965. It too had the Salmson for power and when the company moved to Kansas City, KA, it was still owned by the company which had now become the National Airplane and Motor Company. 11965 was later sold to an Emil Reinhart in Minneapolis, MN and its registration was cancelled on 5-15-39. (Photos of this a/c are in the Rezich collection.) Apparently when the company moved it also decided to introduce the National 35 engine–a small two cylinder opposed engine that would become the powerplant for National Bluebirds to come. In KC the next ship was completed in December 1934 and would be NC14430, s/n4 with the National engine and a model change to LP-4. This would also be the time period when the new Group II approval was acquired–records indicate that they owned both Grp 2-334 and 2-465. Again another move and this time they landed in Billings, MT. Here the little company found a second story warehouse to convert to a factory and three more Bluebirds would be produced, NC15506, 15509, and 15510–s/n’s 5,6,and7 all as LP-4’s with the National 35 for power.

I have a nice shot of the factory with the three Bluebirds in various stages of construction and the completed NC14430 in the background. It seems apparent that while production capabilities were limited they could have built more if only there were buyers to be found. The last four Bluebirds have no evidence in the FAA records of ever being sold!! The president of the company was listed as A.B. Green who first showed up in the records as the General Manager in the Tulsa era. We do know that Mr. Green ended up teaching Aviation courses in the Billings Technical School during WWII and died in an auto accident right before the war’s end. So what happened to the Bluebirds? For years I have asked any one who would listen to the Bluebird story about possible remnants–I’ve even searched a Billings wrecking yard with no luck. I am still hoping something will show up–anything will do!!!

Here are several side stories
–records seems to indicate that AB Green flew a Bluebird to Washington, DC to enter in the safe airplane contest sponsored by the Dept of Commerce under the guidance of Eugene Vidal. I have no information on this but we do know the Bluebird didn’t win. (the winner was the Stearman-Hammond-and that was surely a winner!!) Another story tells of the local pilots flying the Bluebird around till the engine overheated, landing in the valley below the airport to let the engine cool off, then firing back up and climbing enough to get back up to the airport before the engine overheated again!! One other story comes from a potential buyer who decided there was no way he could do flight instructing in the little Bluebird–especially because it was doubtful it could be flown back to the West Coast.

So, while I hope to find a genuine Bluebird in a barn someday–I’m not waiting. I have built up wing panels based on the dimensional information we do have and laid out the fuselage and tail surfaces with the help of the factory photo. It was a nine hundred pound gross flivver–almost a powered glider but it has some unique features and I think it is worth the effort to recreate this curious piece of aviation history. Besides I think a National Bluebird is probably what the country needs about now!!

The article that follows appeared in the May 1935 issue of Popular Aviation.

The Bluebird was one of many such efforts to introduce an affordable aircraft, (this one for less than $1,000), for those interested in flying during the 1930s. Unfortunately this was in the depths of the depression and even low prices permitted few who could take advantage of such offers and expected sales never materialized.

Something New in Lightplane Design

This is a view of the “Blue Bird,” new “teardrop” type of lightplane designed for the private owner.

With the incorporation in January last of the National Airplane and Motor Company of Billings, Montana, general production started on the Blue Bird, a lightweight aircraft with a “teardrop” body and a “beam” fuselage.

These two changes, together with the locating of the center of gravity in the center of the plane, constitute the principal departure of the inventor from accepted methods of design. And in keeping with the structural changes is the price — less than $1,000.

To see the plane, an open, two-place land monoplane, one is unimpressed, in fact, a trifle disconcerted by its bug­ like shape; but to fly it and handle the controls quickly convinces one of its flying ability.

Its steadiness and stability in the air, its slow take-off and landing speed — 27 miles per hour — and its cruising range of 350 miles, tend to make it an outstanding plane in the class field it is planned to serve. The ship will do an hour in the air on 2 1/2 gallons of gasoline, cruising at 75 m.p.h. and can attain a top speed of 85, all of which contributes strongly to its adaptability for serving the area reached by the Billings factory.

In this mountainous and semi-mountainous region, reside many stock ranchers, whose flocks of sheep and herds of cattle range far and wide, and who, from time to time, desire accurate and rapid check-ups; in this locality are also countless Utopian spots for the hunter, the fisherman and the week-end vacationist-spots now reached only after long automobile drives over crowded highways and rough side roads or perhaps by arduous pack trips.

There are scores of summer homes owned by business men who desire to commute between their mountain retreats and their places of business but who cannot because of the prohibitive distance. And it is these people and their pressing need for such a low price, low maintenance cost aircraft that induced the officials of the new airplane company to locate their first plant in this territory.

The ability of the Blue Bird to make use of any small area as a landing field — an open mountain meadow, a clearing in the forest, a level lakeshore, a hay or stubble field or a large lawn, further adapts it to the general needs of the great northwest. The city owner-operator needs only an ordinary open field in order to safely set the ship down.

Several qualities of the Blue Bird, the value of which are at once apparent to the experienced pilot, offers the novice, too, a sense of familiarity and security. For instance, it is almost impossible to put the ship into a spin when pulled into a climb as it will oscillate when the pull of gravity over­comes the pull of the motor. Likewise, there is little chance to roll, stall or dive the ship. Without the pilot touching the controls, it will remain its stability in flight and without guidance will make a perfect three-point land­ ing.

A two-cylinder, opposed National 35 motor that develops 35 h.p. at 2,500 r.p.m., powers the plane. The engine has a two-throw, counterbalanced crankshaft and a 4-inch bore with a 3 5/8-inch stroke. Chrome-nickel cylinders, aluminum pistons and crankcase and dural connecting rods make for a sturdy power plant that will adequately handle the plane. Empty weight of the ship is 452 lbs., disposable weight, 448 lbs., and the gross weight, 900 lbs., which puts its power loading at 25.7 lbs. per horsepower. The wing loading is 5.14 lbs. per square foot.

The Blue Bird is a design by A. B. Green, who has been most actively engaged in aviation pursuits since Wilbur and Orville Wright first startled the world by sailing through the air at Kitty Hawk. Quite appropriately, with the pioneers of the air industry, Mr. Green began his career with a balloon ascension and as early as 1910 constructed a dirigible at Omaha, Nebraska.

During the war he was an experimental flier and more recently has built planes commercially in a number of places, notably in Kansas City and California, where he put on the market a passenger cabin job with an open pilot cockpit at the rear of the cabin. His experience, plus his originality, has produced a little ship that is well worthy the attention of aero fans.

The lightweight ship idea, involving both low cost and safety, has been a pet of his for a number of years, Mr. Green said in an interview. His first experiments were unsuccessful as he attempted to produce an all-metal job.

“Then I decided to do away with the conventional, lengthy fuselage,” he said, “and in its place use a beam construction (illustrated in the accompanying photograph). Likewise, I built an abbreviated ‘teardrop’ body and placed the center of gravity in the center of the plane. It had all the desired stability and safety in handling a light­weight ship required and met my most rigid tests.

“I am still flying my personal ship. It has 3,000 flying hours behind it, has covered 250,000 miles and when I recently had it relicensed by the Bureau of Air Commerce, I found it unnecessary to expend a cent for repairs in order to meet the test requirements.” The Blue Bird is being manufactured under a department of commerce license. As much care is put into its construction, the builders aver, as into ships of many times the price. Zippered inspection flaps are built in for easy access to cable fair-leads and pulleys.