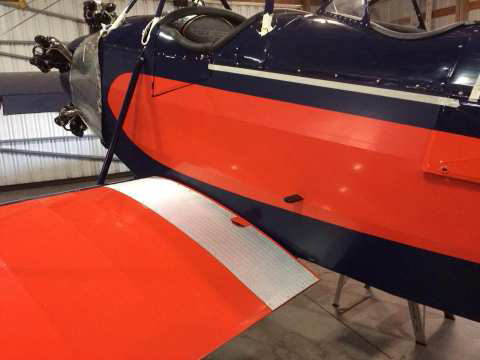 There is something exciting in the air-or more accurately, something exciting about to be in the air. Bob Coolbaugh of New Market, Virginia and Life Member of VAA3 will, if all goes as planned, fly his Viking “Kitty Hawk” for the first time after years of restoration work.

According to Juptner in his “U. S. CIVIL AIRCRAFT” series of books, the original “Kitty Hawk” biplane series of aircraft were manufactured by the Bourdon Aircraft corporation at Hillsgrove, Rhode Island. “In 1930 the Bourdon Aircraft Corp. was merged into the Viking flying Boat Company at New Haven, Connecticut” and the manufacture of the “Kitty Hawk” biplane resumed with the B-8 model. It is the B-8 model that Bob is now completing-Viking “Kitty Hawk”, B-8 to be more exact.

This airplane was originally outfitted with a Kinner 100HP K-5 engine and later with the larger Kinner R-56 with 160HP. The plane was interestingly enough described as “dainty”, “snappy” and “efficient”. The B-8 “Kitty Hawk” weighs 1178 pounds empty and has a gross weight of 1950 pounds giving it a useful load of 772 pounds. The cruise speed is 95 mph with a landing speed of 42. Sounds like my kind of airplane! It is a three-seater, by the way.

Now, back to Bob’s Kitty Hawk, NC975M! This Kitty Hawk sold new to the College of William and Mary in Williamsburg, Virginia where it served as a trainer to instruct both students and faculty. It last flew on Friday, June 13, 1974 out of a seaplane base in New Hampshire. And on that Friday 13th being well, Friday the 13th, the Kinner failed and a crash landing ensued. At the time of the crash, NC975M was equipped with EDO 2260 floats and had spent most of its flying time hauling sightseers over Lake Winnipesaukee (photo) starting in the mid-1940’s and up until that fateful Friday 13th. It crashed in a field after taking off from Paugus Bay (New Hampshire) Seaplane Base. And so the “Kitty Hawk” sat in storage until restorer extraordinaire Bob Coolbaugh came along in 2011 and rescued it from oblivion.

These past few weeks, Bob (with the help of some of his air minded friends, – I probably should say “aviation minded” friends!) – has installed and rigged the tail feathers. By the time that you read this Bob and his aviation buddies should have the ailerons installed and rigged and have probably completed the initial engine run, too. Next is the day that Bob has been working towards and dreaming of for years. Bob gets to fly the Kitty Hawk.

I am sure that we all wish Bob many years of fun flying in this truly rare airplane. He plans to use it to hop rides.

Yesterday, I was at Triple Tree for the annual Fabric and Tailwheel Fly-In which now includes the new and just inaugurated this year Young Aviators Fly-In. By all accounts this was another successful fly-in for Triple Tree. It was really great seeing everyone even on this hot June day in South Carolina. Our very own chapter newsletter editor, Jim, gave a really great talk on what being a hard core and dedicated pilot in the world of sport aviation is all about. Thank you, Jim, for the very informative and well thought out speech. It takes many years of experience and thought to acquire that insight.

I hope to see many of you at Oshkosh.