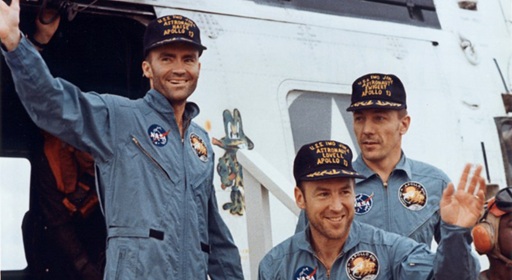 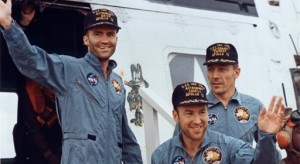 Fred Haise (left), Jim Lovell, and Jack Swigert emerge from the recovery helicopter on board the aircraft carrier Iwo Jima after being retrieved from the Apollo 13 capsule. 17 April 1970. NASA scan by Ed Hengeveld.

December 3, 2014 – One of the most harrowing and triumphant adventures in space exploration history will be commemorated at EAA AirVenture Oshkosh 2015, as members of the Apollo 13 crew and team will participate in activities marking the 45th anniversary of what was called the “successful failure” of the aborted moon mission.

Apollo 13 mission commander Jim Lovell and flight director Gene Kranz will lead the members of the mission team participating in activities at Oshkosh. They will recount the preparations for what was planned as the third manned mission to the moon, the circumstances surrounding the malfunction that threatened the crew, and the ingenuity and determination that allowed the astronauts’ safe return to Earth.

EAA AirVenture 2015, the 63rd annual EAA fly-in convention, will be held July 20-26 at Wittman Regional Airport in Oshkosh. The final schedule and list of additional Apollo 13 team members are still being established. Exact schedules and activities will be announced as they are confirmed.

Lovell is one of America’s most experienced astronauts, with flights on four missions. After flying aboard Gemini 7 and Gemini 12, he was command module pilot for the famed Apollo 8 mission that in December 1968 became the first manned mission to orbit the moon. His flight in Apollo 13 was portrayed by Academy Award-winning actor Tom Hanks in the 1995 movie Apollo 13.

Kranz was one of Apollo’s most experienced flight officers during the 1960s, and was a top official in NASA mission operations until his retirement in 1994 with experience stretching from the early Mercury flights through the space shuttle program. Most recognized with his trademark vest that he wore in NASA Mission Control, he was portrayed by actor Ed Harris in Apollo 13, whose performance earned an Academy Award nomination.

Both Lovell and Kranz have visited the EAA fly-in convention on several occasions, most notably in 1994 when the memorable “Salute to Apollo” program recognized the 25th anniversary of the first successful manned moon landing. Both men are also avid aviation enthusiasts with military aviation backgrounds.

Additional EAA AirVenture information, including advance ticket and camping purchase, is available at the AirVenture website.