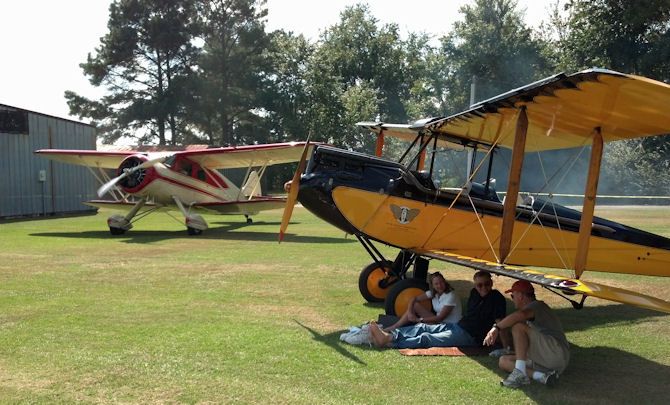 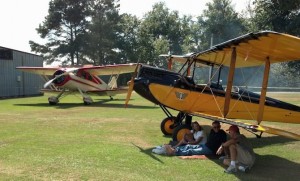 Vintage Aircraft Association Chapter 3 was originally named the Carolinas Virginia Antique Airplane Foundation. This active group of antiquers has its headquarters in Walnut Cove, North Carolina. Most of their members are from the Carolinas and Virginia with quite a few members from other states such as New Jersey, Tennessee, Georgia, etc. What sets this chapter apart from others is their membership. There are several member names that you will recognize as being major contributors to the antique airplane world such as Jack and Golda Cox, Susan Dusenbury, Morton Lester, Dolph Overton, etc. 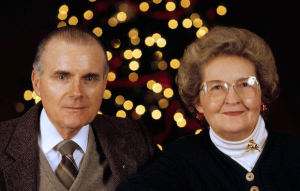 Jack Cox, who recently passed away, and his wife Golda have been active supporters of Chapter 3 since 1966. (Most of you remember that Jack and Golda edited Sport Aviation for many years). This chapter has members both current and past who have owned vintage airplanes of just about every make and model that you can name including a very rare Douglas DC-2.

Longtime member Colgate “Coke” Darden regularly attended chapter fly-ins in his DC-2. Coke also owned a very rare Douglas Dolphin that he often flew to the gatherings. Coke passed away a few years ago but his DC-2 is one of only 2 that are left in the world. Prior to Coke’s death the airplane was sold to KLM who ferried it to Holland and I believe it still flies today. The other DC-2 is located at the Museum of Flight in Seattle, Washington.

Another Chapter 3 member, Dolph Overton, was very active in chapter activities and was one of the original founders. Dolph collected and restored over ninety vintage airplanes and built what was at the time the largest private collection of antique airplanes and autos in the country. Dolph owned a museum in Santee, South Carolina called the Wings and Wheels Museum. Vintage aircraft owners everywhere owe a great deal of gratitude to Dolph for his insight as to the value of preserving vintage aircraft and artifacts related to early aviation.

Morton Lester was also an active member of the group and a large supporter of VAA and EAA. Morton was inducted into the VAA Hall of Fame and served on the EAA Foundation Board for a number of years. Morton owned an interesting collection of antique aircraft including a Clipped Wing Monocoupe and a Ryan SCW. Morton donated a Jack Rabbit racer, a Crosby CR-4 racer, an Aeronca C3, a Fairchild PT-19, the Ryan SCW, and a Culver PQ-14 to the EAA museum. Morton has been a long time member and a core part of VAA Chapter 3 since the very beginning. 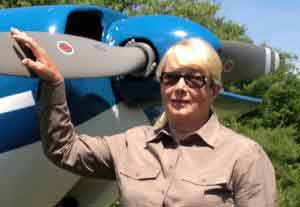 Susan Dusenbury is the current President of Chapter 3. Susan was inducted into the VAA Hall of Fame this fall. She is also an active pilot and restorer.

In addition to all of these rare antiques a number of the members have warbirds including a P-51, AT-6’s, PT-19’s, Cessna “Birddogs”, etc. When you attend one of the Chapter fly-ins you will see a very wide variety of airplanes along with an enthusiastic group of people.

Speaking of fly-ins, this group has some major events. Two of them are very well attended by people from all over the southeast, midwest, and northeast. Their spring fly-in is always held the first weekend in May each year. The location is near Raleigh, North Carolina, a place called Timberlake, North Carolina. The airport is the Person County Airport. In the fall of the year the pilots and their airplanes head for Woodward Field in Camden, South Carolina on the first weekend of October each year. Camden is located northeast of Columbia, South Carolina. Both of these fly-ins are very popular and attract a lot of very interesting and often rare airplanes from a number of surrounding states. 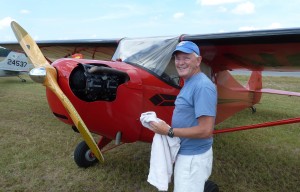 As you can readily see if you enjoy flying your antique airplane to events and gatherings this is the chapter to belong to. They are very active in preserving antique aviation including restoration of antique ad classic airplanes. VAA Chapter 3 offers a venue for the exchange of restoration techniques for vintage airplane owners and restorers. They are also a source of information for the location of parts and for craftsman who can restore vintage planes and parts. Basically, they host a networking system for vintage aircraft.

Both the EAA and the Antique Airplane Association were founded in 1953 and were well established nationally by the early 1960’s. It was then that the first attempts were made to create a local affiliate in the Carolinas/Virginia area with the first steps being taken by Colonel Jim Hamilton of Charlotte, North Carolina. Col. Hamilton obtained a list of owners of pre-World War II aircraft located in North Carolina and sent out cards inviting them to attend an organizational meeting in Winston-Salem, NC. The weather precluded anyone from attending and Col Hamilton lost his enthusiasm for the project and eventually the list of names made it into the hands of Swanson Poer. Swanson and his wife organized a fly-in at the Burlington, NC airport and 7 antique airplanes arrived. Thus the seeds were sown for the formation of the Carolinas Virginia Airplane Association Foundation and in early 1963. A first fly-in was held on October 12-13, 1963 at the Gastonia, NC airport. It was a huge success and thus began the history of VAA Chapter 3.

It is interesting to note that Jack and Golda Cox of Asheboro, NC began writing, printing, and mailing the group’s newsletter publication in June, 1966. They continued writing the newsletter through the end of 1969 when they resigned and began their 30 year careers at EAA in January, 1970 as writers and editor of Sport Aviation. Golda came up with the name Antique Airways in 1966 for the Chapter 3 newsletter and it has retained that title since. Ray Bottom would succeed the Coxes and publish Antique Airways for a remarkable 32 years.

What a history this organization has in the vintage aircraft world. Over 50 years of active participation with antique aircraft. The chapter members have been a major contributor to the preservation of these airplanes. Little did the founders realize what they were starting back in 1963. The chapter continues to this day to preserve the history of their chapter and the history of vintage airplanes. They communicate with their members through their excellent newsletter Antique Airways that is published 6 times each year. Jim Wilson is the current editor of this informative newsletter. They also have an excellent website presence along with active Facebook page under the Facebook group page name of “Carolinas Virginia Antique Airplane Foundation”.

If you would like to learn more about this historic chapter please visit www.vaa3.org.