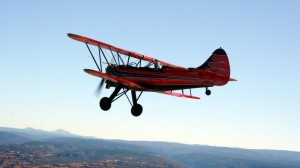 Based in northern California, “Delta Gold” began in 1992 with a small group of vintage and classic aircraft pilots who enjoyed flying events. For many years Vintage Chapter 25 was famous for an annual Dichondra Field Fly-In along the Deep Water Channel in the Delta, south of Sacramento. This field was owned by charter member and long time EAAer Bill Merwin; friends called it the Field of Dreams because it was almost impossible to make a bad landing on the cushy dichondra. Bill had a Cessna 170 and then became enamored with Swifts. With his passing a great friend to EAA and access to the dichondra field was lost.

Vintage Chapter 25 does not a have home field; it is a Chapter of flyers, travelers, and aircraft enthusiasts who meet each December in the Aviators Restaurant at Sacramento Executive Airport to set up a calendar of events at different locations for the upcoming year. Members share help and advice frequently, thanks to email, cell phones, and meetings that roam.

This year for example, the Chapter met for a spring visit to the private airport Alta Sierra for a BBQ lunch hosted by long time member Bob Opdahl in his hangar with his beautiful Waco; at Jackson Westover Field in the Sierra Foothills to tour Catto Props; Sonoma Sky Park to see the many antiques there; and Marysville for the Golden West Fly In. The complete event calendar is posted at www.vaa25.eaachapter.org . In the past years we have had meetings as far afield as Shelter Cove, Lake Tahoe and Fort Bragg. 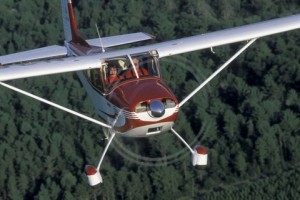 More modern aircraft owned by members include several RV models, three Pitts, a Husky, the world’s fast closed circuit Wittman Tailwind, and a CTLSi, a Cessna 150, and a 182. Currently there are 22 active members in what has always been a small and friendly chapter.

One of the main activities for the chapter is presenting rallies and supporting Young Eagles. Members live in Northern California spread over a large area. Some live in the foothills of the Sierra Mountains, others in the Sacramento Valley, and some on the Pacific Coast. Since that covers such a large area, they have two Young Eagles Coordinators.

The Young Eagle Coordinator in the Valley based out of Sacramento Executive Airport is Stan Lawrence. He is also a founding member of DGA Aviation Partners, LLC where he is the manager and check pilot. You can see the thirteen aircraft that the thirteen DGA partners own, and learn more about the partnership at http://home.surewest.net/flyride/dga/aircraft.html . 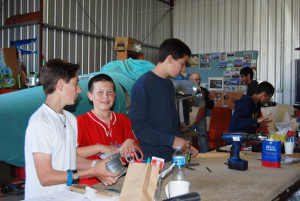 Stan and Chapter President Greg Smith, a former chapter Young Eagles Coordinator, are very involved with the many planes and pilots in DGA’s ideal partnership. Working within the framework of the Young Eagles’ program, Stan organized the blending of DGA’s RV-12 build with several dedicated Young Eagles.During the build, at twice weekly regularly scheduled sessions, the YEs would come to a DGA hanger and have a hands-on experience helping build the plane. They followed along and learned the aspects of building an airplane, all the while sharing the camaraderie of the hanger with pilots. To further enhance and enrich the YEs experience, every week, on a rotating bases, Stan would give an hour dual instruction to one of the YEs.

Stan says, “As to my involvement in the EAA Young Eagle program – it’s the sincere desire to promote general aviation to our younger generation. It is also to inspire and motivate them in a career that is exciting and rewarding! But, mostly it is to create advocates that will support general aviation now and in the future. The average age of the population of pilots is around 55. The percentage of the population that are pilots keeps getting smaller all the time! We need to change that if we expect to maintain our current freedom to fly in the manner we currently do! Everyday we loose some freedoms because our numbers are so small. EAA is one the best advocates of aviation in our nation and the Young Eagles program is an excellent vehicle to reach the younger generation!”

VAA25 Charter Member Red Hamilton, who personally has flown over 800 Young Eagles, is the Chapter’s Young Eagles Coordinator on the Coast, and is the builder, owner, and pilot of the world’s fastest closed circuit Wittman. He also owns the oldest flying Cessna 180. Red lives with his wife Marilyn Boese, the chapter’s Secretary and Spark Plug, on a private strip in Fort Bragg called Virgin Creek. Together they organize the YE rallies on the Pacific Coast at Little River Airport. There, in Mendocino County, they work with a group of volunteer pilots who fly the Young Eagles along with VAA 25 members.

The Chapter’s regular Young Eagles’ flights take place at Sac Exec and Little River, The Chapter was famous for a time for taking Young Eagles’ events to other previously underserved airports like Colusa and Walnut Grove. So far this year two large rallies have been organized by Stan and held at Sac Exec flown by VAA 25 members, DGA Partners, and friends. Another large rally was organized by Red and flew out of Little River in Mendocino.

Red says, “Very early on flying Young Eagles was a main purpose for VAA25 members. I think that initiative has been very rewarding for those involved. Fun, flying, and fellowship that will go on to the next generation is the goal.”

Greg related “The Experimental Aircraft Association’s Vintage Aircraft Association network is an ideal framework to preserve vintage aviation, and at the same time help bring young people into aviation. At Chapter 25 members do both by sharing their combined knowledge and skills in keeping the planes of a bygone era flying and by sharing their camaraderie and enthusiasm of aviation with the youth of today in the Young Eagles Program.“