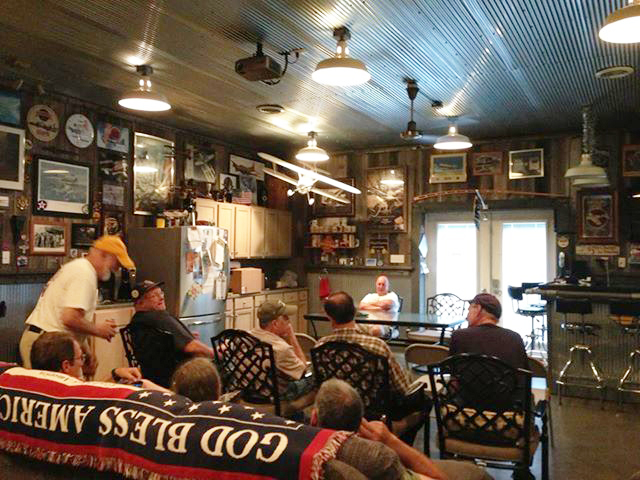 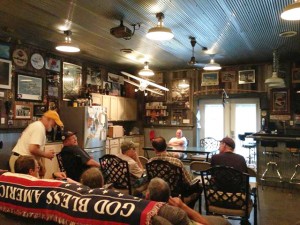 As most of you are aware, Vintage AirMail the past several months has been featuring an airport or EAA/VAA Chapter that is making a difference in the antique airplane world and the world of aviation. This month our focus is on VAA Chapter 37 located at Dekalb County Airport (GWB) in Auburn, Indiana. Auburn is located 20 miles north of Fort Wayne in Northern Indiana. Coincidentally, Auburn is known as the “Home of the Classics”. The Auburn Automobile Company was founded in 1900 and produced its first automobile here in 1903. This same company eventually acquired Duesenberg. E.L. Cord of Cord Automobile bought the Stinson Aircraft Company and for several years operated a Stinson dealership just south of Auburn in what is now the Auburn Cord Deusenberg Museum building.

Notorious gangster John Dillinger raided Auburn’s police station in 1933 stealing a submachine gun, steel vests, three rifles, six pistols and over 1,000 rounds of ammunition. As you can see Auburn is truly a town with a history and an interest in antiques of all sorts including antique and classic airplanes. To this date the town of Auburn hosts the Auburn Cord Duesenberg Festival held each Labor Day weekend. VAA Chapter 37 members participate in this annual event by volunteering their services. This past year the EAA Ford Tri-Motor was also present at this event.

VAA Chapter 37 was started by a man named Les Matheson along with several others who had an interest in vintage airplanes. The chapter was organized largely as a way to enjoy and appreciate antique aircraft. They started meeting at the Auburn Airport in a meeting room. It was decided that they were interested in a more permanent meeting place much like many other Chapters they had visited in other areas of the country.

To that end the group approached the Dekalb Airport Board and gave them a presentation on EAA, Vintage Aircraft Association, vintage airplanes, and why they were there along with their plans for the future. The results were surprising. They were originally thinking of a small hangar to be used for a “clubhouse”. The Airport Board’s thoughts went much further. The original presentation was to tell them who they were and what they wanted to do at their airport and the board responded by asking them for a detailed proposal. While they were sitting there, the board discussed their needs and what they could do to support VAA Chapter 37. What a difference it makes to have an airport that likes and supports general aviation. If only we could find this attitude with more airport boards around the country.

The Auburn Airport Board 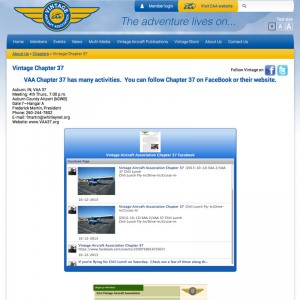 ended up renovating a 100’x50’ hangar for the chapter and between them they created a mutually beneficial relationship. Basically the board stated that they would spend a certain amount of money and that they would reach out to the public in an attempt to further justify the airport. Since the chapter had a list of activities and plans that involved the public, they became the major focus to gather public support. Largely because of this hangar rent was kept to an affordable level. Inside this hangar the group built a “clubhouse” and today they host other events for the public and and for outside aviation groups. VAA Chapter 37 feels that this is a great way to support their local airport and preserve their opportunities in the future. They are involved in activities around the airport in support of the FBO and an aviation museum located across the field. As member Tim Fox said “Everybody works together to make it better”.

Chapter 37 not only works with the airport but they are a large part of it with a varied cross section of antique and classic aircraft including a Cessna 195, Aeronca Chief, Cessna 170, three J-3 Cubs, a Stinson 108 and numerous other airplanes. Chapter 37 members are active pilots as well as supporters of the airport and vintage aviation. They actively support the EAA Young Eagles program in conjunction with EAA Chapter 2 located in Ft. Wayne, Indiana. They have hosted Boy Scout aviation merit badge sessions, several type club fly-ins, and regular chapter gatherings. They have movie night every other Friday night at their hangar. One of the projects that the Chapter is most proud of is the restoration of Harold Newman’s Monocoupe for EAA. That project was led by chapter member Phil Ritter and other chapter volunteers. The airplane resides at Pioneer Airprt in Oshkosh today.

Probably one of the most notable activities of this chapter is in conjunction with AirVenture. Their members are very active participants in Vintage Aircraft Association work weekends preparing for AirVenture. They work throughout the year along with volunteering during the actual event. The chapter is responsible for a number of enhancements around the vintage area at Oshkosh. This past year one of their major projects was the rebuilding of the archway in front of the Red Barn at Oshkosh. To say that they are enthusiastic about vintage airplanes would certainly be an understatement. The chapter also claims Vintage Aircraft Association President Geoff Robison as a member. 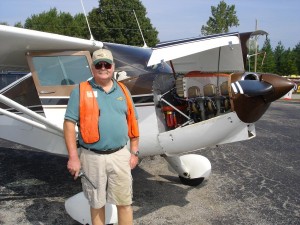 Having talked with a couple of members of VAA Chapter 37 I can honestly say that this is an enthusiastic group of vintage airplane people. They work together to help build vintage aviation. They do this through active participation in the Young Eagles program, rebuilding and flying antique and classic airplanes, and volunteering above and beyond both before and during AirVenture. If you would like more information on this active group please visit their website at www.vaa37.org.

Thanks to VAA Chapter 37 member Tim Fox for his assistance with this information.

Remember, if you have a favorite airport which welcomes vintage aircraft, please contact Airport Action here and send us your story.