A PILOT YOU SHOULD KNOW: Don Kiel

by Vintage Aircraft Association | Feb 4, 2017 | Pilot You Should Know, z-blank

(Ed. Note: This is Connor’s first contribution to Vintage AirMail. Learn more of how Connor became a contributor at the end his feature on Don.) 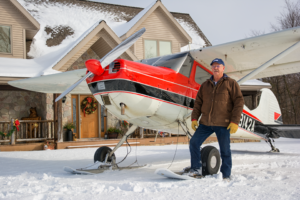 Meet Don Kiel (VAA #15132) and N8142A, his 1952 Cessna 170B on Federal Hydraulic Retractable skis with Ultra-high-molecular-weight polyethylene (Poly). Don has owned 42A since 1985 and flown on skis since 1990. Don is fortunate to have his own 1000 x 65ft strip, unlisted, very private, located at his home in northeastern Wisconsin.

Don didn’t fly into his strip in the winter until this year when he put the poly on his skis. He says the the Poly is night and day difference from aluminum skis. In the past he had to have a friend push the airplane to get it moving. With the poly the airplane will move with ease at ¼ throttle.

Don is a retired Northwest Airlines Senior Captain which was a job that took him all over Europe. Despite that he does not consider himself a worldly traveler, but honors his roots as a Wisconsin Farmboy.

It would makes sense then that one of his favorite places to fly his 170 to is to Iola Central County (68C). For most of the year lunch is served on Fridays and there is good camaraderie. Don flies there for Friday lunch as often as he can and says “I’m heavy on the camaraderie that’s what I like most about General Aviation.”

Another favorite destination of Don’s is his friend Jay Baeten’s private strip; 9WS2 Antique Aerodrome in De Pere, WI. During the summer there’s a monthly Saturday lunch with good food and you guessed it, great camaraderie.

Outside of Wisconsin’s good food and friendly people, the farthest Don has taken his 170 is all the way to Northern Idaho for a backwoods fishing trip. Being a very hands-on type of person, he very much enjoys the challenge of the small strips there. Don plans to fly there again this summer and he says with a laugh “I have three strips on that trip that are listed as hazardous.”

Flying into his home strip is no picnic either. It’s 65 feet wide and 1000 feet long with trees 300 ft from one end and downhill the other way. Skis make it even more of a challenge. When asked what he’d say to pilots who had never flown with skis, Don recalls his first time on skis, “when you’re a pilot with as many hours as I have your first reaction when landing is to get on the brakes, but you have no brakes. You need to plan ahead and anticipate what the airplane is going to do. It helps to keep the airplane moving when you’re on the ground.”

Don also mentions that the most important thing when ski flying for the first time is not to fly on an overcast day unless it is a place you’ve been to recently. He adds “you have no depth perception on overcast days and can’t see the snow drifts and uneven surfaces.”
As long as the the weather is favorable Don plans to fly his 170 to EAA’s skiplane fly-in on February 18th. Otherwise keep your eyes open for N8142A over the Northeastern Wisconsin.

About the Connor Madison 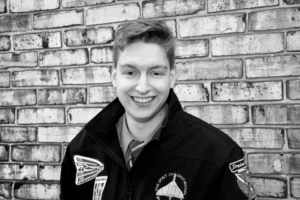 I’m 23 and airplanes have fascinated me for as long as I can remember. My grandpa has been volunteering for EAA since before I was born so I was only four months old the first time I went to Oshkosh for the airshow. Attending the show yearly made me want to learn photography so I could capture all the awesome things I was seeing. This led me to a getting a B.S. in Radio, TV Film from UW Oshkosh in which I channeled everything I learned about cinematography into still photography.

I became involved with the Vintage association last year after I shared a photo I took of the Red Barn at night on the Vintage Facebook page. Earl Nicholas contacted me asking if I could take more photos for Vintage during AirVenture. Of course I accepted and it has opened all kinds of opportunities along with an amazing relationship with EAA.

Taking aviation photos is my favorite thing to do and I would be happy to take pictures of you and your airplane and tell your story. You can contact me here.