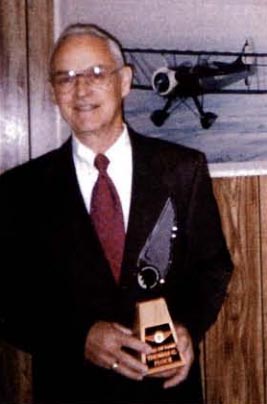 As a young man, Tom Flock worked for a pair of small town entrepreneurs in Bloomingdale, Indiana. In addition to running a 1,500 acre farm, Jordan and Woody raised cattle and hogs, operated a grain elevator, ran a Mobil Oil distributorship, had a hardware and implement business, and after WW-II, started a small airport with a flight school catering to GI Bill student pilots. Tom was only 12 years old when he began working for Jordan and Woody, a relationship that would last until 1959, when Tom went into business for himself in partnership with his father and father-in-law.

While working for Jordan and Woody’s brother-in-law, Don Stipp, Tom was given the opportunity to learn to fly, and was able to use three airplanes: and Aeronca Champ, Piper PA-12, and Ercoupe. Every now and then a Piper J-5 was also around to fly, and Tom could all the gas he wanted, generously given to Tom for free in recognition of his work ethic as he spent his spare time working around the airport and other businesses. By the time he took his Private check ride at age 17, Tom had nearly 200 hours logged.

Attending Purdue University in 1950, at times Tom used the PA-12 to commute weekly to Lafayette, Indiana. Duty called, and Tom found himself in the Air Force, trained as an aerial gunner and spending the duration instructing others in the B-29, B-36, and B-26 bombers.

During this time, Tom also began a new experience, as a married man. He married Barbara Malone, and they were blessed with the births of three daughters, Cathy, Cindy, and Karen, who later gave their parents four grandchildren to dote over.

Tom purchased his first airplane in 1964; a Navion A, which he later replaced with a 1962 Rangemaster H, which he still flies. In 1978, Chuck Wilson, a local crop duster and friend of Tom’s asked if he might be interested in partnering in the restoration of an antique biplane. They first looked at a Stearman, but didn’t really see what they wanted, and kept up the search. A trio of Waco UPF-7 projects in California was purchased and hauled back to Indiana, where the restoration process began.

Tom soon came to really enjoy the process, and began looking for other UPF-7s to rebuild. His expertise on the design was also becoming well known, so much that by the late 1980s many people were calling and writing to gain knowledge from his experiences.

A total of five were restored, plus a Piper J-3 Cub. At the 1993 American Waco Club Fly-In, Tom was presented with the Bob Poor Memorial Award, given annually to the club member whose workmanship is exquisite.

Tom Flock has generously given his time and talents to help the Waco restoration community, and has given us five beautifully restored Wacos in the process. His expertise, coupled with his generous personal nature, made it easy to highlight his accomplishments by inducting him in the VAA Hall of Fame in 1999.