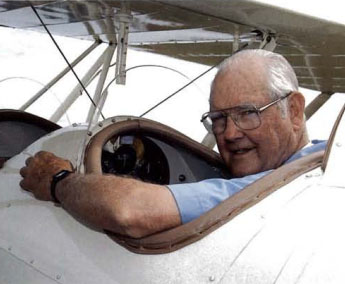 A lifetime of accomplishments behind him, Dr. Roy Wicker shows little sign of slowing down. As a World War II naval aviator, he flew blimps, including the Goodyear Model K, on anti-submarine patrols. Later, he flew fixed-wing navy aircraft including his favorite, the Douglass Dauntless (SBD). After discharge, he headed off to dental school and started a long career as a dentist in the Atlanta and then Quitman, Georgia, areas.

He loves to fly, and his enjoyment of aviation has never wavered. As soon as his practice was established in the late 1950s, Roy bought a Cessna 170, then a 180, plus a club share of a Piper Colt.

By the early 1960s, Roy chose to get even more deeply involved in sport aviation. Since he was a youngster, Roy was particularly fascinated with the airplanes and aviators of World War 1. The Nieuport 24bis looked like it would make a great subject for a replica project, and Roy wasted little time in re-creating a stick-for-stick, 120-hp LeRhone-rotary-powered full-size replica. Roy’s biplane, finished in the markings of French ace Charles Nungesser, was completed in 1965. It proved to be a fascinating time machine for those who were fortunate to see the airplane fly and for Roy, whose admiration for World War I pilots expanded.

His experience with his new “old” airplane led him to the restoration arena, and over the years he’s created a steady stream of beautiful restorations, including a Warner-powered Fleet 1 trainer and a Cessna C-34. His most recent restoration was chosen as the Grand Champion Antique during the 1993 EAA Sun ‘n Fun Fly-In. In partnership with Barbara Kitchens, Roy restored a very special Davis D-1W. Originally owned by Walter Davis, owner of Davis Aircraft of Richmond, Indiana, it was dubbed Whistler II. It had a bump cowl, sliding canopy, and wheelpants. As restored by Roy, the D-1W is the spitting image of its former self, and it continues to turn heads nearly a decade after its restoration.

Along the way, interspersed between his restorations, Roy built a Marquart Charger that also wowed spectators. His vintage orientation still showed in his homebuilt, as he finished it in the markings of a prewar Curtiss Helldiver as it flew off the Saratoga with the navy squadron Fighting 6. His latest project is an RV-8 homebuilt he’s building with Lee Ballard.

Roy continues to offer his expertise and skills to his many friends in the aviation world. He has left a lasting mark on the aviation and vintage aircraft world with his breathtaking craftsmanship and never-ending desire to re-create the glory days of the past. Our congratulations to Roy on his induction into the VAA Hall of Fame!