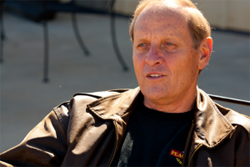 The Vintage Aircraft Association initiated its prestigious Hall of Fame program in 1993. Since then, 33 exceptional men and women of the vintage aircraft movement have been inducted into this select group of vintage airplane-oriented aviation achievers.

Ron’s fascination with airplanes began when he was just 16 years old and lasted throughout his lifetime. He soloed an Aeronca Champ at the age of 16 and earned his private pilot certificate at 17 while still in high school. After high school Ron enrolled in the Indiana University Kelley School of Business, where he also chose to enroll in the Air Force ROTC flight-training program. During that period, Ron flew co-pilot on both the C-45 and the DC-3 for Indiana University. Upon graduation from Indiana University, Ron was selected as a Distinguished Military Graduate in the ROTC program. He entered the United States Air Forces as a second lieutenant and began Air Force flight training. In 1966 Ron was assigned to South Vietnam to fly the C-7 Caribou, supporting the Marine Corps and the Army Special Forces. He was based in Da Nang. During his service in Vietnam, the Air Force awarded Ron the Distinguished Flying Cross and two Air Medals for his courageous service. Ron received an honorary discharge from the Air Force in 1969 and was immediately hired by Delta Air Lines and soon thereafter bought a J-3 Cub, which he never parted with. In 1974, Ron moved to Griffin, Georgia, to live on a community airstrip. Soon thereafter Ron began restoring vintage aircraft. He has restored a Taylorcraft, a J-3 Cub, two Stearmans, and he built a 1916 Curtiss Jenny with a partner. In addition to the Cub and the Jenny, Ron also owned a DC-3 known as the Candler Field Express, a Stearman Cloudboy 6L, and a Waco YMF.

After retiring from Delta in 2002, Ron continued to serve as chief pilot on the Delta Air Lines DC-3 from 1999 through 2004, flying the DC-3 on a number of trips in addition to training other pilots.

In 1979 Ron founded Alexander Airplane Company, which became a major source of materials for vintage aircraft restorers and homebuilders alike. Ron operated the company until 1996 when Aircraft Spruce and Specialty purchased it. In 1992, Ron developed a series of hands-on workshop programs designed to instruct people in aircraft building and restoration skills. He named these programs SportAir Workshops. Thousands of builders and restorers have since been trained or fine-tuned their skills in these SportAir Workshops. In 1999, the workshops were sold to EAA with Ron remaining as the director of the program for a three-year transition period.

In 1992, Ron purchased a DC-3 to use as a promotional tool for Alexander Aeroplane Company, and after the sale of the company he used the aircraft to give sightseeing rides and flight instruction, including DC-3 type ratings.

Also in 1992, Ron purchased Stits Poly-Fiber Inc. and remained president of the company until he sold his share to his business partner in 2002. Stits (now Consolidated Aircraft Coatings) headquarters remains at its original manufacturing facility on Flabob Airport in Riverside, California.

Ron was a regular contributor to EAA Sport Aviation, Vintage Airplane, Kitplanes magazine, and the Vintage AirMail newsletter, typically writing technical articles for both builders and restorers. He was also a regular presenter in the Theater in the Woods during AirVenture. Ron’s main area of interest in the world of vintage airplanes was World War I aircraft.

In 2004, Ron founded the Candler Field Museum, a nonprofit organization created in part to replicate the original Candler Field. Included in the project are the airfield (formerly Peach State Aerodrome now Alexander Memorial Airfield), an airpark development, and the Candler Field Flying Club, which focuses on teaching young people how to fly.

Ron took his final flight west on November 17, 2016. Aviation will be eternally grateful for his many contributions.