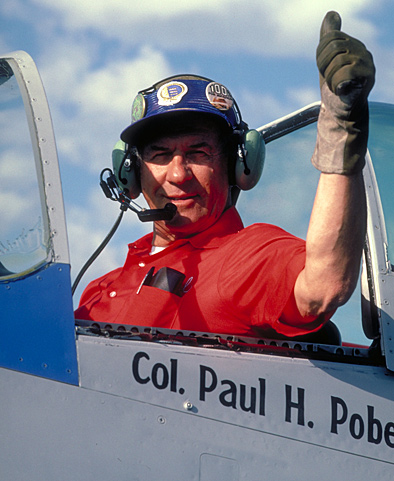 The Founder and Chairman of the Board of EAA, many people certainly recognize the countless contributions made by Paul Poberezny to sport aviation. As a military officer and pilot, he served as an instructor in PT-19s, and as a pilot in a ferry group, he flew just about every airplane in the U.S. inventory. Eventually, he would earn all seven wings the military had to offer at that time. After the Korean War, Paul returned to Milwaukee and instructed in Cubs, Champs and every so often in his own BT-13. TheBT-13 had been obtained in a trade for a Stearman Paul had bought war surplus for $200 in 1945.

Old airplanes have long been a favorite of Paul’s, since his high school days flying an OX-5 powered American Eagle biplane. He courted his soon-to-be wife Audrey with that airplane, and enjoyed flying an airplane he had rebuilt to flying condition with his own two hands. His skills in aircraft construction had begun with balsa model airplanes, and progressed through a Primary Glider project he completed and flew as it was towed behind a friend’s car at the age of 15. He’s long been acknowledged as a man with a deft touch on the control stick. The older airplanes of his youth and the many airplanes he has been privileged to fly within the EAA family have all served to strengthen his commitment to vintage aviation. In fact, the first airplane that became a part of the EAA Museum was both a vintage airplane and a homebuilt- Steve Wittman’s “Bonzo” racer.

Older airplanes had long been a part of the EAA heritage, since the link between rebuilding and building from scratch is indelible. For many years Paul welcomed the pilots of the Wacos and Travel Airs to the annual Fly-In. In 1970, a group of EAAers asked if they could park airplanes together at the Convention, and they also inquired if EAA was interested in the formation of the Antique Division. Paul wholeheartedly gave his support and encouragement, and with the addition of the Classic judging category, the new combination gave the EAA Convention an attendance boost and added pilot recognition that continues to benefit EAA to this day. Paul’s work with vintage airplanes continues to this day, as he is often active in a variety of restoration projects. Most recently, he has lent his expertise to the restoration of the EAA Aviation Foundation’s Consolidated PT-3 trainer.