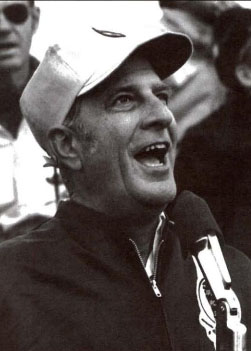 Aviation is often a family interest, and that was certainly true on the south side of Chicago, where the Rezich family was living during the golden age of aviation. The boys, Frank, Nick, and Mike, haunted the nearby Chicago Municipal Airport (later Midway Airport) and built rubber-powered models of many of the airplanes of the day.

Nick Rezich soloed a Waco RNF in 1933, at age 14, beginning a lifelong career in-and love of full-size aviation. He worked for Benny Howard at Howard Aircraft in Chicago, and attained the position of plant manager before being pressed into military service in World War II.

Following the war, he founded and operated the famous aviation themed tavern near Midway Airport, the Pylon Club.

With his brother Frank, he designed and built the Rezich Brothers Special, a Goodyear-class racer, in the late 1940s. The airplane would be one of the first donations to the EAA Museum, in Hales Corners.

Nick continued to build on his flying skills, and flew charter for Bluebird Air Service at Midway in various planes, including a Wasp-powered Bellanca and a Lockheed 12. He also did barnstorming with his brothers in the family Travel Air and Pitcairn.

After the war, he also flew for Morton Salt and International Harvester, and began taking on skywriting jobs.

He served as the president of the OX-5 Aviation Pioneers, and Nick (EAA 225) was a strong supporter of EAA during its early days, promoting the organization at the Pylon Club and participating in early fly-ins and air shows. He often flew and announced for free, since early EAA Chapter budgets were so lean that it was hard to even come up with the funds to buy awards for the participants.

He also used his booming voice over the public address system to describe the maneuvers the pilots were flying, and soon became known as the “Voice of EAA.” He was also the master of ceremonies for many of the early EAA evening programs, especially during the Rockford era.

In the early 1950s, Nick moved to Rockford, Illinois, just as EAA had done with its fly-in. In Rockford, he flew for many years for the Atwood Vacuum Machine Co. Over the course of his career he flew nearly 35,000 accident-free hours.

He loved to fly for fun, and to share his love of aviation with young people. One of the youngsters he helped was his son, Jim, who would solo a J-3 at age 16, and move on to both A&P/IA and ATP ratings. Under his father’s tutelage, he soloed the family Travel Air D-4000.

Nick helped found EAA’s Antique/Classic division in the 1970’s, served as its first treasurer, and wrote a monthly column, “Reminiscing With Big Nick” for the magazine. Nick performed roles at EAA continuously from 1956 until the early 80’s when throat cancer finally quieted the “Voice of EAA” in 1981.