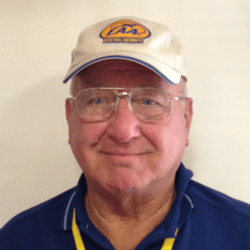 The VAA began its prestigious annual hall of fame honors program in 1993. Over the past 26 years, 33 outstanding men and women have been inducted into this select group of aviation achievers.

This year, these highly accomplished aviation personalities are joined by John, whose achievements have earned him not only a place in the VAA Hall of Fame but also well-deserved recognition for his lifetime support of the vintage aircraft movement.

John began his fascination with airplanes before reaching the age of 5 when he managed to nail together several sticks to resemble an airplane in his father’s hobby shop. John’s parents realized where John’s interests lay and started purchasing model airplane kits for him to assemble. For John, life was all about airplanes whether it was building models or reading aviation magazines or comics. John’s models became more sophisticated over time, and by the age of 11 he built his first model with movable control surfaces— a Hellcat. With all of the glue and paint that John was using for his model projects he was pressed into getting a job delivering papers to pay for his passion for airplanes. When John was growing up it was a common practice for the entire family to pile into the car and go for a relaxing Sunday afternoon drive. It was on one of these Sunday afternoon excursions, when John was 12 years old, that the family car passed the Princeton Nassau Airpark in Trenton, New Jersey, and John saw a sign advertising airplane rides for $20. John immediately saw his opportunity and was able to talk his father into taking him back to the airport for a plane ride. Those Sunday rides soon proved to be fruitful for John as, on another ride, he spotted an airplane in the distance climbing out just after takeoff. The next day, John rode his bicycle to the area and was able to locate the airport. Back in those days there were no fences to keep people out, so John simply walked into a hangar and tried on a few of the planes for size only to be “busted” by the fixed base operator. Undeterred, John kept riding his bicycle over to the airport where he was finally offered a job washing planes and later a lineboy position swapping his time on the job for flight time. John’s dreams finally started to come true when he soloed at the age of 16 at the Morrisville, Pennsylvania, airport where he had been working for the past few years. John went on to get his private certificate at the age of 17. John kept working and getting more certificates and was eventually hired as a charter pilot by Princeton Airways flying mostly Piper Aztecs and Apaches. From there he went on to fly for Allegheny Airlines, which later changed its name to USAir. John flew with USAir until retirement.

At the age of 19, with some help from his grandmother, John was able to purchase a Piper J-3 with an A65 Continental, which he amazingly flew a little more than 450 hours in just the two years that he owned it. He then purchased a Ryan PT-22 with a Kinner R-56 engine, and flew this airplane for 100-plus hours. He was 21 years old at the time. John sold the PT-22 to buy a Stinson 108 powered by a 165-hp.

Franklin engine. It was with this Stinson that John began working on and restoring his own planes. John kept the Stinson for a little over a year and decided to sell it to buy his dream plane — a Howard DGA-15, which he kept for six years and flew for more than 1,000 hours. John then sold the Howard and bought an early model Beech Bonanza. It was not long before he moved on to one of the most sought after and treasured of all of the vintage airplanes — the Spartan Executive. John’s was a Spartan Executive 7W, serial No. 2 with a 450-hp Pratt & Whitney engine. John flew this beauty for about two years before making a trade with George Mennen for George’s damaged Spartan Executive 7W, serial No. 34, which was the last Spartan Executive built. George delivered the damaged Spartan to John, and John then began the long process of restoring a vintage plane, which included fuselage and gear repairs, a new instrument panel, new interior, and new glass. (At that time, factory-produced parts were still available for his Spartan.)

In the meantime, John needed a plane to fly so he bought a Waco CTO Taperwing with a 350-hp Wright engine. John likes to say that this plane was “a goer!” With the many months and hours of work that John did on the Spartan during the restoration and on the Taperwing after he purchased it, John qualified for his FAA airframe and powerplant mechanic certificate. He went on to earn these certificates after taking the written, oral, and practical tests. John kept and flew this Spartan for four years. John then sold the Taperwing and Spartan and bought a Beech Baron, which he still owns today. On July 4, 1976, John went back and again bought his dream plane — another Howard DGA. This time he bought the 11 model. Only four Howard DGA-11s were built by the factory. The other three were destroyed over the years, leaving John with the only original Howard DGA-11 in existence. (There are a few other 11s in existence, but these were either 8s or 9s converted to the 11 model.)

For over four decades John was a close friend of the “Resident Genius of Springdale, Arkansas,” the recently deceased Jim Younkin who is also a VAA Hall of Fame honoree. Jim, of course, was known for his authentic, full-scale copy of Benny Howard’s 1935 Bendix and Thompson trophy-winning Howard.

DGA-6, Mr. Mulligan, and for his exact replica 1929 Thompson Trophy-winning Travel Air Mystery Ship. John was one of the few pilots chosen by Jim to fly these airplanes to shows around the United States — a testament to both John’s character and skill as a pilot.

John’s support and high level of involvement in and commitment to the vintage aircraft movement throughout his life has been steadfast. It has been positive. It has had a very definite and recognizable impact on aviation, not only in the aviation community but also on the general public.

John Richard Turgyan will be inducted into the EAA Vintage Aircraft Association Hall of Fame on the evening of November 7, 2019, at the EAA Aviation Museum in Oshkosh, Wisconsin.