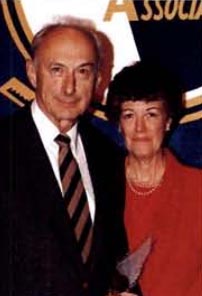 As a professor of engineering at the University of Arkansas, Jim Younkin solved many a problem, and passed out a few to his students. Never one to rely only on theory, he has long been known as someone who took his own two hands and brain and applied them to the situation at hand. He invented and patented the components of what would become the Mitchell Autopilot, and later, he applied his considerable skill to an area of aviation that he really enjoyed – the racing airplanes of yesterday. What used to be his hobby has been a full time occupation for decades now, and the results have been on the flight line for many to enjoy. First to burst upon the scene was the spectacular Travel Air Mystery Ship replica engineered and built by Jim, which was first seen on the fly-in circuit in 1979. Then he turned to the sleeper of the racers, that cabin class phenomenon called Mr. Mulligan. Jim’s reproduction of that famous Benny Howard Thompson Trophy winner was followed by something on the other end of the spectrum.

In 1988 he wowed fly-in crowds with a smaller airplane that was no less spectacular. His transformation of a Piper Pacer into a sleek, speedy, going places machine set the high water marks for craftsmanship and beauty that are still pursued today. That Pacer, dolled up in a red and black scalloped paint job, and capable of cruising 155 mph on 160 hp, has inspired many rebuilders to head down the custom aircraft path.

Other aircraft that have benefited from Jim Younkin’s touch include the Beech Staggerwing, with a series of changes that upgraded a small run of D models to G model status, and the clip wing Monocoupe.

Recreating particular airplanes are not all he has done. Most recently, he has created the Mullicoupe, an original creation that uses a 450 hp Pratt & Whitney engine married to an airframe that looks a lot like a Monocoupe, just bigger. Its name delineates its heritage ­ inspired by the ‘Coupe and Mr. Mulligan, two of the airplanes have been completed to date.

Jim’s artistry in sheet metal, a medium in which he has been acknowledged as a master artisan, was recently documented in Sport Aviation. He’s never wanted to be secretive with his methods of forming and shaping the various parts that make up an airframe, and as a teacher, he’s happy to share them. What will he come up with next?