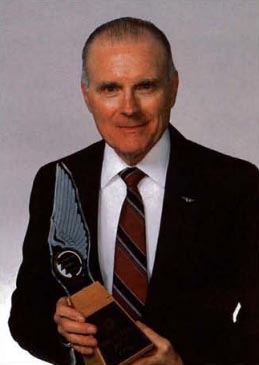 Jack Cox was born in Seagrove, North Carolina in January of 1934… the same year such aircraft as the DC-2, Ryan ST, D-145 Monocoupe and the Luscombe Phantom were introduced.

His first airplane ride was prenatal, so he claims to have literally been hooked on aviation from the moment of birth. The first airplane ride he recalls was in a Ford Trimotor at Asheboro, NC, in the late 1930s. Other rides would follow regularly over the years and would include a lot of unlogged stick time.

After graduating from college and beginning a teaching career, he immediately began blowing most of his paychecks on flight instruction and soloed in a J-3 Cub in May of 1956 at Greensboro, NC.

Following a tour of active duty in the U. S. Navy, Jack returned to the teaching profession … and met Golda in the summer of 1958. They were married that December, which Jack says is the best thing that has happened to him in this life.

Jack and Golda bought their first airplane, a J-3 Cub, in the early 1960s and it would be followed by a succession of lightplanes, including a Champ, Luscombe 8A and a Bellanca Cruisair. Joining what is now the Vintage Aircraft Association’s Chapter 3, they became active participants in its activities, with Jack becoming the newsletter editor in June of 1966.

It was through their efforts on the newsletter that Jack and Golda came to the attention of Paul Poberezny, and soon they began being drawn into EAA activities. They received an EAA award for their newsletter, Antique Airways, in 1967, and Jack received an EAA President’s Award in 1968 for his promotion of vintage aircraft. In 1968 he was made a member of the EAA’s antique airplane judging committee at Rockford, and the following year, 1969, he served as chairman of that committee. In that capacity, he led the first effort to formalize judging standards and set up permanent vintage aircraft judging categories for EAA.

In January of 1969 Jack and Golda moved to Santee, South Carolina, to join the staff of the newly created Wings and Wheels transportation museum. During that year Jack researched and wrote the histories of the museum aircraft, which included two Ford Trimotors, designed the museum layout and signage, wrote the tour scripts, designed the museum logo and coordinated and publicized museum fly-ins and special events. That fall his presentation book on Wings and Wheels won an award presented by the South Carolina Department of Tourism.

Late in 1969 Paul Poberezny invited Jack and Golda to join the EAA staff at Hales Corners, Wisconsin, and they came to work there early in January of 1970. Among his new duties, Jack was charged with the task of formalizing and widening the scope of EAA’s vintage aircraft activ­ity. Over the next few years he would manage the day-to-day Headquarters work that led to the formation of EAA’s Antique/Classic Division, including such tasks as designing the Division’s first logo, which featured the 1903 Wright Flyer. He also founded and named the Division’s publication, The Vintage Airplane, and was its first editor.

During this same period, Jack wrote an article for Sport Aviation proposing a new classification and judging category for factory aircraft produced after January I, 1946. Older aircraft would continue to be classified as “Antiques,” but the new category of post-war aircraft, which at that time was the largest unaffiliated entity in aviation, would be called “Classics.” With the concurrence of EAA president Paul Poberezny, the Classic category became a formal part of EAA’s structure and activity. The immediate result was a doubling of showplanes at local EAA fly-ins all over the country, and for much of the following 30 years, the Classic category would be the largest of all those represented at the annual EAA Convention at Oshkosh.

Making a place in EAA for owners of Classic aircraft was a significant factor in the spectacular growth of the organization during the 1970s – growth that gave EAA the size and resources to more effectively represent its members and to be able to continue to grow during the 1980s when the rest of general aviation was in decline. The Classic category also provided incentive for owners to restore postwar aircraft that might otherwise have been allowed to deteriorate and eventually be junked – as happened to so many pre-World War II aircraft.

Today, after nearly 30 years of employment by EAA and his retirement last year, the creation of the Classic category remains, in his mind, one of Jack’s most significant accomplishments.