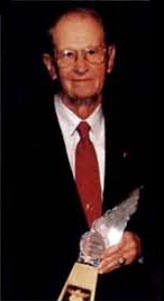 Since he was a young man, airplanes have been a part of Harold Armstrong’s life. A ride in an Aeronca C-3 started him on a path that would eventually lead him to the cockpits of both a C-141 Starlifter and a Pitcarin Fleetwing.

After soloing in a Swallow TP he rebuilt in 1940, Harold joined the Army Air Corps as an airplane mechanic, and applied for pilot training. He was commissioned as a pilot in 1943, and spent most of the war as a B-17 instructor pilot, but never stopped itching to get into the fight. He earned a B-29 assignment and was en route to the Pacific as a B-29 pilot when the war ended. Like thousands of his fellow Air Corps airmen, he mustered out of the service, but he was able to keep a commission in the Reserves. After a five year stint as an instructor at a local FBO in his home state of Maryland, he was called up as a pilot in 1950 during the Korean War. The next 23 years were spent in an Air Force career that would include two tours of Vietnam as a C-130 pilot with the 773rd Tactical Airlift Squadron, flying 846 hours in the war zone. He retired from the Air Force in 1973 as Col. flying the C-141 Starlifter.

Retirement plans had been long in the making for Harold. He had been collecting parts and pieces for a variety of projects during his service to his country. He had a soft spot for the airplanes of his youth. His first restoration was a Waco 10, which was the Reserve Grand Champion Antique in 1981. His second was an airplane that had been in the family for many years as a time builder for Harold’s son, Bob. The Aeronca Champ would be judged the Classic Grand Champion at EAA Oshkosh ’83. Bob and his father continued to work as a team on the next project, one that Harold’s wife Martha had tracked down and picked up while he was in the military. The Pitcarin PA-4 Fleetwing II was little more than a fuselage, drawings and a dream, but with dogged determination and skill, it emerged from the Armstrong shop in 1990 destined to become the EAA Oshkosh Antique Grand Champion that same year.

Harold and Bob have recently completed the development of a long-time dream of theirs – High Rock Airfield on the Maryland/West Virginia border, a grass strip with a hangar where friend and family came this past June to celebrate Harold’s 80th birthday, where it was announced he was to be inducted into the EAA Antique/Classic Hall of Fame, making that day one of his fondest memories.