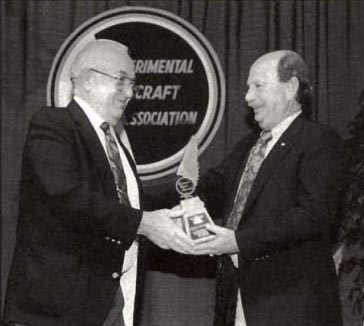 George York has served the world of antique and classic airplanes since the first days of the Convention, serving as a judge since 1970. Within that area, George has served as the Chairman of the Classic aircraft judging for a number of years and has been a member of the Division’s Board of Directors since 1980. While on the A/C Board, George most recently served as the Secretary.

He has restored a number of airplanes, including several Aeroncas, a Taylorcraft and a Beechcraft D17S Staggerwing. He is currently working on the restoration of another Staggerwing. A charter member of the Staggerwing Museum, he also serves as the Secretary/Treasurer and newsletter editor of the Staggerwing Club. A pilot since he soloed an Aeronca Chief in 1943, George also served in the U.S. Navy as a pilot during WW II. He flew the PBY Catalina and the Mariner during his service in the Pacific. He has been a member of EAA since 1962.

Our congratulations to George upon his induction into the EAA Antique/Classic Hall of Fame.