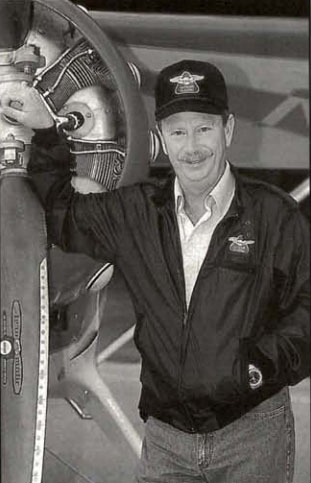 Butch Joyce’s first logbook entry for a half-hour of dual instruction at age 10 in a J-3 Cub was made on September 9, 1954, but his roots in aviation go all the way back to his birth. His father, Espie Sr., was a pilot and owned a variety of aircraft when his son was growing up next to the local airport near Mayodan, North Carolina.

While in college and serving in the Army (where he served with the elite Special Forces Green Berets), he built a Pitts Special biplane and became an EM member, serving as EM Chapter 8’s president during the 1960s.

Later in that decade, Butch became involved with an aircraft group whose primary interest was older airplanes. That group, now VAA Chapter 3, rekindled his love for antique and classic aircraft, and he would go on to own and fly a Staggerwing Beech, Monocoupe, UPF-7, Clipped Wing Cub, and a Model 35 Bonanza, among others. Starting on the Antique/Classic Board as an advisor in 1981, he was elected president in 1988, and held that position until 2004, a span of 16 years.

Butch says that he’s most proud of the fact that in 1991, in cooperation with the Aviation Unlimited Agency, he initiated the creation of the VAA Aircraft Insurance program. He credits his wife, Norma, for keeping the program running well in an ever-changing insurance market. The program has grown to become one of the VAA division’s most popular benefits, and has helped create growth that has seen the division’s membership more than double, from 3,200 to 8,400 members.

During that time he has also served as the chairman of VAA’s activities during EAA AirVenture Oshkosh. He was presented with the EAA President’s Award in 2004.