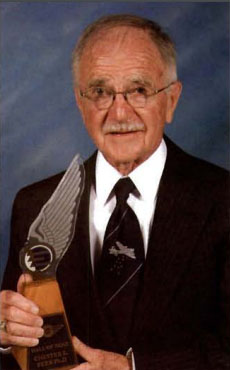 World War II veteran. Thirty-one airplanes owned, many of them restored with the help of his wife. Author of six aviation history books. Engineering professor. Father of two boys and husband of Marian.

Five short sentence fragments, but it’s the gaps between the words that fill out the remarkable story of our 2007 VAA Hall of Fame inductee, Chet Peek, Ph.D.

Chet was born on Armistice Day, November 11, 1920, on the family farm homesteaded by his grandfather in 1883. Chet still owns that farm, near Paullina, Iowa. His first airplane ride came in 1932, a two-dollar ride in a Waco RNF paid for by his grandfather. In ’39 he managed to start flying lessons in a Taylorcraft A. A year later, he was selected to be one of the 10 students in the second CPT program sponsored by Iowa State University, and by May of 1941, Chet was thrilled to be the holder of a limited commercial pilot certificate, with more than 100 hours in his logbook.

Close to graduation from mechanical engineering school at Iowa State at the outbreak of World War II, Chet was accepted into the Engineering Cadet School in the Army Air Corps and entered the school on June 2, 1942. A month later, while on his first 24­ hour pass and against all regulations, he married Marian Swain, whom he’d met while they were both freshman at the Ames, Iowa, campus.

Chet served as engineering officer for the 8th Air Force, 95th Bomb Group, and would serve in that capacity until the war in Europe ended in the spring of 1945.

Reunited for the first time in two and a half years, Chet and Marian started life in the Midwest, where Chet began his career as an engineer with a Frigidaire distributor, designing commercial refrigeration plants and air conditioning systems. Like so many of their peers, they started their family, with sons Stan and Tom arriving in 1947 and 1951. Later, Chet’s career would take him into ever-higher positions within the commercial trailer production business. At age SO, Chet went back to college to earn a doctorate in industrial engineering. After graduation, he worked in academia, serving as the head of the Oklahoma City University’s MBA Program, retiring in 1989 as an instructor in Oklahoma University’s College of Business.

When Chet sent in the photos and biographical information we requested for the Hall of Fame program, he neatly organized a series of envelopes for the various periods in his life. One envelope was appropriately marked “Antique Airplane Addiction.” Not surprisingly, it was the thickest of them all, liberally sprinkled with shots of his family and airplanes and of the many projects he’s enjoyed working on throughout the years, which have served as the subject of his aviation books, including The Pietenpol Story, The Spartan Story, The Taylorcraft Story, Flying with 40 Horses, Resurrection of a Jenny, and The Heath Story. He’s currently working on a history of the Standard J-l. For more information on his books, you can visit his book website, www. ThreePeaksPub.com.

Throughout the years of engineering work, restorations, and writing, Chet’s wife, Marian, has been busy as well, earning a master’s degree, sewing fabric, hauling wings, and enduring innumerable retrieval trips to haul home a dilapidated airplane project. Chet was thrilled to have Marian and their sons, Stan and Tom, along with their grandchildren and friends, join them in Oshkosh to celebrate Chet’s induction into the VAA Hall of Fame. In his acceptance speech, Chet said, “I feel so honored to be here with all these other aviation greats and very humbled, because, as you will see, there are really some outstanding people here,” Peek said. “lt seems like only yesterday that I sent a dollar or two off to some fellow in Milwaukee who was starting a new club for private aviators. He called it the Experimental Aircraft Association, the EAA. Who would have thought back there in those days, as you look around today, the organization would be what it is and what it is doing.

“We’re free to fly in this country, and it’s something we should appreciate, and the EAA is very much responsible for a very large portion of that freedom. It’s been a great journey, these last SO years at the EAA, and I’m happy to say it’s not over. I’ve got a Pietenpol almost done in my garage.”