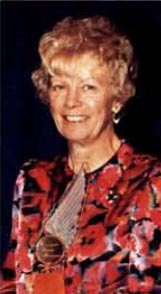 As a young lady, Ann exhibited a quality that would benefit her throughout her lifetime – her ability to pick a goal and stick to her plan, without losing sight of her intended target. Her degrees from the University of Michigan in education and music were put to uses she couldn’t imagine when she graduated. Ann has served in a wide variety of teaching and service roles, including teaching English in Michigan, as Iowa Aviation Commissioner in the mid-1970s and later as the state’s Transportation Commissioner, the first woman in the country to hold that position. Her career as a professional musician included 20 years as first horn for the Chicago Civic Orchestra and the Toledo Symphony.

As a newly-minted private pilot in 1959, she surprised her mother by giving her a ride as her first passenger at Ann Arbor’s Young Field. It really was a shock, since Mrs. Holtgren didn’t know Ann was taking flying lessons! Ann went on to earn her flight instructor certificate and would teach both ground and flight instruction for over 30 years.

Ann is most recognized by fellow pilots as the young lady who first retraced and completed Amelia Earhart’s 1937 attempt to fly around the world. Ann accepted a challenge to make the 1967 flight with Bill Polhemus, Lee Koepke and William Payne. Completed during the 30th anniversary of Earhart’s failed attempt, Ann and her crew were honored with numerous awards. Ann’s book detailing the journey, “World Flight, the Earhart Trail” would receive the Nonfiction book award from the Aviation and Space Writers Association. The flight has served as a subject that has helped Ann explain more about aviation and the work of Amelia Earhart to countless schoolchildren in the decades since the flight.

Ann and her husband Don live on an airstrip/farm, and in 1992 completed the restoration of the sole example of the Fairchild XNQ-I, an advanced trainer built by the company during WW II. The Pellegrenos were awarded a Special Recognition trophy by the Division for their efforts to bring back a long forgotten piece of aviation history.

A long-time resident of Iowa, Ann has continued to write, including a trilogy detailing the history of aviation in Iowa, “Iowa Takes to the Air.” She is in the final stages of completing the last book in that series.