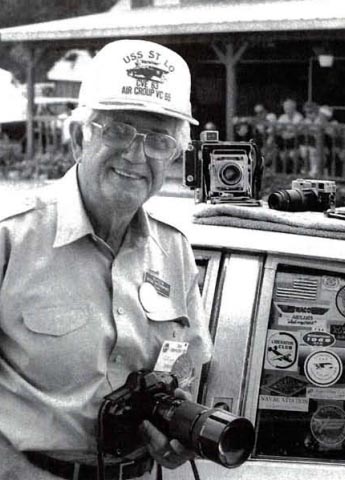 One can contribute to vintage aviation in many ways, and Ted Costopoulos (aka Koston) of Melrose Park, Illinois, has managed to get involved in many of them. His first flight, made in 1937, was in a Kinner-powered Bird CK biplane. Ted’s lifelong fascination with photography blossomed, and he was soon shooting aircraft on a regular basis. During World War II, he served as a naval aviation photographer aboard the aircraft carrier USS St Lo (ex-USS Midway). His naval service also included a stint performing reconnaissance photography in the Marshall Islands and Guam.

Returning to Chicago after WWII, he opened his own photography studio and immediately got busy on a number of civilian aviation fronts. He has served as:

Ted was inducted in the Illinois Aviation Hall of Fame in 1994.

Over the past four decades, Ted has blessed EAA with his services as a volunteer photographer. Starting in the 1960s he shot some of the most famous images of EAA and VAA members and their aircraft. He continues to contribute to Vintage Airplane on a regular basis, and our archive of images shot by Ted over the years continues to be a valued resource. Ted’s photography has been published in EAA publications and all over the world.

Our congratulations to Ted on his induction into the VAA Hall of Fame!