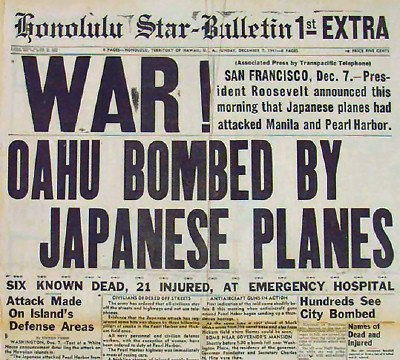 The thoughts below about December 7th and Pearl Harbor came to us from Charlie Harris, VAA #2158, Director Emeritus. 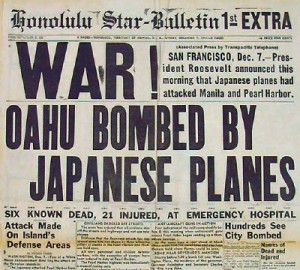 This Sunday morning, December 7, 2014 at 7:55 a.m. is the 73rd anniversary of the unprovoked attack on Pearl Harbor by the naval and air forces of the Empire of Japan.

We were caught by complete surprise and it cost us 2,403 Navy, Army, Marines and civilians killed in action and 1,178 wounded, a total of 3,581 casualties. We lost 8 battleships, 3 destroyers, 3 cruisers, and other support naval vessels. Had the U.S. not had the miracle of our carriers being at sea and away from Pearl Harbor, the disaster at Pearl would have been unimaginably worse.

We had largely disarmed through the economic difficulties of the 1930s and it took us years into the early part of World War II to recover and gain military parity with our enemies. The miracle at Midway, six months later, June 4, 5, 6, 1942 was a gift from the Almighty.

We are in much the same political and military posture today, but today’s military weaponry will not give us the time we had in World War II.

Eternal vigilance is the price of freedom.

Peace can only be achieved and maintained through strength.