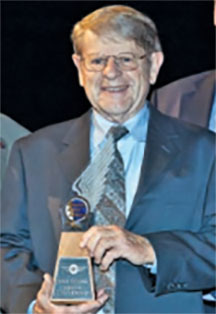 John W. Underwood of Glendale, California, was honored in last fall’s VAA Hall of Fame induction ceremonies, which took place in Oshkosh, Wisconsin, in the Founders’ Wing of the EAA AirVenture Museum. Author of a dozen aviation books (including Of Monocoupes and Men, The Stinsons, and Acrobats in the Sky, among the dozen) and numerous articles concerning aviation history, John has had a lifelong fascination with airplanes since he was a little boy of 7. His life has been immersed in aviation ever since. In 1949 he learned to fl y at the famous Glendale School of Aeronautics as he worked for Grand Central Aircraft. His working days there were filled with refurbishing surplus World War II aircraft including P-51s, Curtiss-Wright C-46 Commandos, and B-25 Mitchell bombers. Later, as an aviation technical writer and illustrator, he continued to earn a living in the industry, all the while amassing a vast collection of photographs and aeronautical materials. His work in the center of one of aviation’s most active locations, the Los Angeles basin, saw him working for Lockheed, being friends with famed Lockheed test pilot Tony LeVier (with whom John worked on the restoration of a Velie Monocoupe), air racing and test pilot Gordon Israel, pilot/ designer Alden Brown (creator of the Brown racer), and even Douglas “Wrong Way” Corrigan. John’s dedication to “getting history right” often sees him lending materials and photos to other authors so more people can be made aware of exactly what happened when. His longtime help to us personally here at VAA HQ has been invaluable for both our editorial work and for our members, who are often the beneficiary of his knowledge and aeronautical collection. VAA is pleased to include him in its Hall of Fame, honoring his contributions to the modern-day efforts to keep the world of vintage aircraft alive and vibrant through his writings and research.