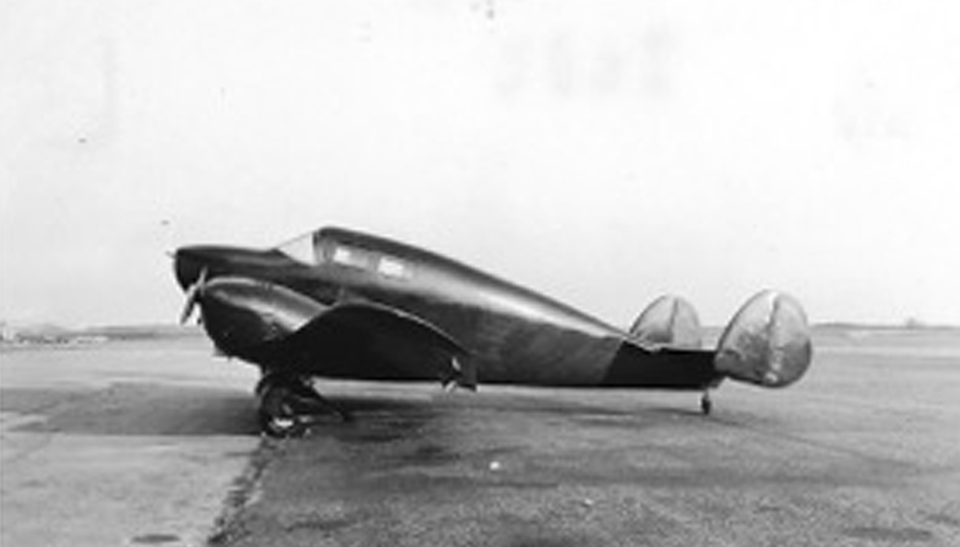 Built by a New Process of Fused Plastics and Mahogany Plywood

Newest entry in the plywood aircraft field is the four-place twin-engined Langley manufactured at Port Washington, NY, by the recently formed Langley Aircraft Corporation. Designed by Martin Jensen and built under the engineering direction of ex-Navy pilot Arthur R. Draper, the airplane employs a new structural process by which plastics fuse layers of mahogany under heat and air pressure.

In the Langley process the plywood sheets are not prefabricated, bent and attached to stringers or bulkheads as are other types of construction. Thin strips of plastic-treated veneer are molded into an integral unit comprising the structure and the skin.

The molded plywood part of he Langley monoplane are multiple layers of veneer in strips ranging from 1/64 in. to 1/8 in. in thickness, formed over a mold and permanently bonded together into a single structure by plastic compositions which react to heat and pressure.

Fuselage, wings, control surfaces and cowling are joined without the use of fastenings such as nuts, bolts or screws. In place of dies, parts are formed on relatively simple wood molds, prefabricated strips of veneer being placed over each other upon the forms while dry. On the mold, parts as big as half a fuselage are placed in a sack of rubberized fabric, each veneer layer being sealed so the grains of wood are at right angles to each other. The parts are then placed in a heated pressure chamber for 60 minutes or less.

The resulting structure is simple, easy to inspect, and cheap to maintain and service. Each engine cowl, wing tip and fuselage nose is removable as a unit. Cowls and firewalls are molded with an integral asbestos lining, although the plywood alone has shown itself to be exceedingly flame resistant.

Plastic plywood is impervious to corrosion by acids, alkalis, salt water and fungus. The Langley product has been tested without signs of weakening in temperature extremes from -40 deg. to 160 deg. F.

The Langley is powered by two 65 hp Franklin air-cooled engines. In tests so far, it has taken off in 200 ft. and landed at 46 mph. A second craft, now under construction will use two 90 hp Franklin engines and is designed for maximum speed of 165 mph and a cruising speed of 148 mph.

Manufacturer’s performance and specifications data for the Langley with the 65 hp engines follow:

As indicated in the Aero Digest article, above, the second aircraft was powered with two 90 hp Franklin 4-AC-199-F3 engines. When completed it was purchased by the U. S. Navy who designated it as the XNL-1. After flight tests and thorough evaluation the Navy decided against placing an order for the Langley. Although the manufacturing process incorporated new methods of construction by which plastics fuse layers of mahogany under heat and air pressure creating a smooth, efficient aerodynamic surfaces that were also resistant to corrosion it turned out that when World War ll started the resins used proved to be in shorter supply than the metals needed in building America’s military aircraft. And the Langley was not considered a priority project. Being a 90 hp twin engined aircraft with excellent flight characteristics it would have been an ideal, economical aircraft to operate for multi-engine instruction.

It is believed that a total of three Langley aircraft were built.

The Navy’s XNL-1 was eventually sold as war surplus. After a crash landing in 1965 it ended up as a homebuilt twin.