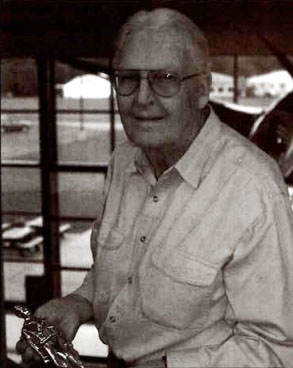 Born in 1918, Alfred Kelch became enamored with airplanes and aviators at age 6 when his uncle Percy Bricker bought a war surplus Curtiss Jenny and flew it to AI’s hometown of Lake View, Iowa. Even uncle Percy’s crash landing of the Jenny didn’t dampen his enthusiasm, although little Al was perturbed with his uncle for wrecking “his” Jenny.

He followed every report of Lindbergh’s Atlantic crossing, listening with headphones to the family radio. While Al was in junior high school, his uncle returned to town with a Curtiss Robin, and Al was given his first flight lesson.

A lifelong love affair with all things mechanical has kept Al Kelch involved in automobile restoration, antique boats, and, of course, airplanes. A career mixing his talents in art and mechanical engineering resulted in the founding of Kelch Manufacturing, a company that pioneered a number of plastic innovations, including the first plastic steering wheel for the automotive trade.

During that time, Al met and, when he could finally afford it, married the lady who would be his partner in all his endeavors, Lois.

As his business grew, Al was able to squeeze a few dollars out of the budget and begin his collection of antique airplanes. He purchased a Piper Cub for $250, and has since restored more than a dozen airplanes, most of which he flew from his rural home and airstrip in Mequon, Wisconsin, where he and Lois hosted many years of antique airplane fly-ins.

AI’s interest in Lindbergh led him to collect memorabilia, and one of the pieces he collected was a small bronze statuette of the famed pilot. Its resemblance to the Oscar statues given in the film industry inspired Al to create the EAA Lindy trophy we all recognize today as one of aviation’s most prestigious awards for aircraft construction or restoration.

Al was one of the earliest members of the Antique/Classic division, and became lifetime member number 6. In the mid-1970s, he and Lois edited the division’s magazine, Vintage Airplane, and he also served as the chairman of the Judging Committee.

He and chief judge Claude Gray created the core rules for judging vintage airplanes, a set of rules that we continue to use to this day. He also founded the “Grand Champion Circle” in a successful effort to invite top award winners to the EAA convention.

While serving as the president of the Travel Air club, a visit to the Parish’s in Tullahoma, Tennessee, inspired Al to add a porch to the convention headquarters of the division, the Red Barn. With the design help of Pat Packard and the carpentry skills of Bob Lumley and other volunteers, the porch was added and continues to serve as a resting and gathering spot for members during EAA AirVenture.

Al serves on a number of boards with aviation interests, including the Sun ‘n Fun board, and is affiliated with the Curtiss Museum in Hammondsport, New York, and the Old Rhine beck Aerodrome museum. He continues to actively work on his collection of aircraft kept at the Brodhead, Wisconsin airport. His most recent restoration project is a Travel Air 4000 formerly owned by Robertson Aircraft and flown by Charles Lindbergh.