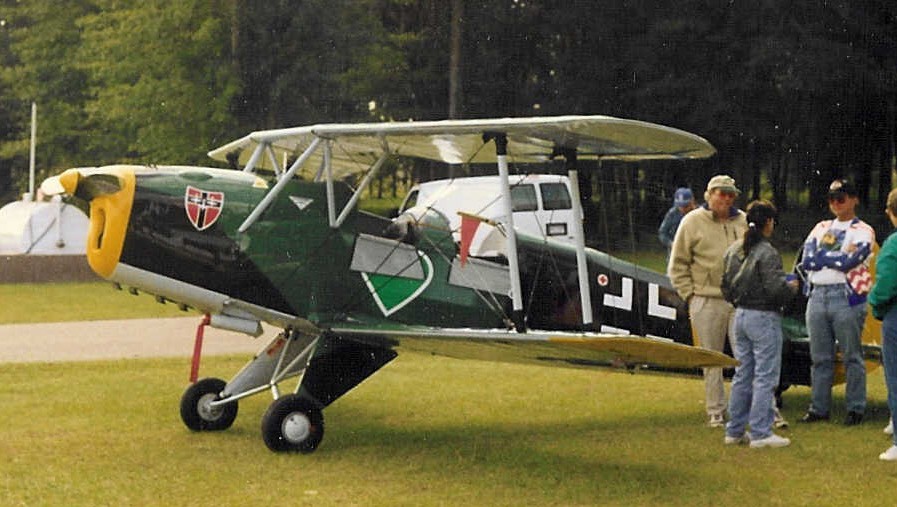 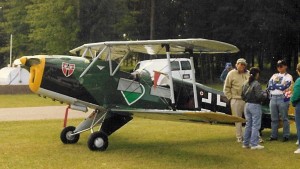 Bucker at an FSAACA fly in at Cannon Creek Airport in Florida.

At this time of year most of us begin thinking about and planning for the end of winter when we can once again enjoy warm weather. That means we will be able to appreciate our antique airplanes. I live in the Atlanta, Georgia area and we usually have some days during December and January when we can comfortably fly an open cockpit airplane. This winter we have had very few of those days so I, like all open cockpit airplane owners, look forward to spring.

The first major fly-in of the year that coincides with warm weather is Sun ‘n Fun held in Lakeland, Florida. This year the dates are April 1-6. This fly-in is a signal to most of us that the open cockpit flying season is once again in full swing. In 1973, a group of antique and classic enthusiasts decided to form an organization that would be responsible for a major fly-in. Mr. Billy Henderson was at the front of this movement and Sun N Fun was born. Let’s look at a bit of history leading up to this decision. 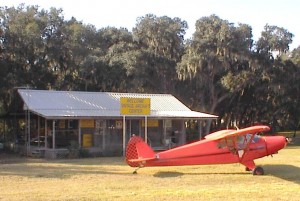 FSAACA past “Antiquers of the Year” Jim Colburn’s J-5 in front of the Vintage Hospitality Center at Sun ‘n Fun.

The Florida Sport Aviation, Antique, and Classic Association (FSAACA) came into being as the result of Billy Henderson inviting Mr. Paul Poberezny to attend FSAACA’s first January Fly-In held in Lakeland, Florida. Paul agreed to fly down from Wisconsin if Billy would guarantee at least 50 aircraft would attend. Immediately, Billy along with Lakeland’s EAA Chapter 454, began working to spark interest in the event. The Florida Aerobatic Club was also involved. They all worked tirelessly to ensure that a minimum of 50 planes would be in attendance. On the day of the event when Paul arrived he did not see 50 airplanes but rather he saw over 150 airplanes. When Paul returned to Oshkosh he was so impressed with what he saw that he gave FSAACA the designation of Chapter One of the newly formed EAA Antique/Classic Division. Today FSAACA still retains the title of the now named Vintage Aircraft Association Chapter One.

The next year the January Fly-In was substantially larger and it was plain to see that the local chapters could not handle the number of airplanes and people involved without help. That is when Billy Henderson suggested that an organization be formed to handle this very successful event. Thus the birth of the Sun N Fun organization with FSAACA and EAA Chapter 454 being the parents of the fly-in.

It is interesting to note that the first Sun ‘n Fun Fly-In was held in January, 1975 at the Lakeland, Florida Airport. It was called Mid-Winter Sun ‘n Fun. Almost 2,000 people attended along with 365 airplanes. In 1976 the fly-in was expanded to a full week and over 1,200 aircraft arrived. 1978 the fly-in became the second largest in the United States topped only by EAA AirVenture in Oshkosh, Wisconsin. Sun N Fun continues to hold this distinction to this day.

As mentioned earlier, Florida Sport Aviation, Antique, and Classic Association also has the title of Vintage Aircraft Association Chapter One. The group needed a home so with permission from Sun ‘n Fun Director Billy Henderson and the Board of Directors, the membership financed and built the Antique/ Classic Building on the Sun N Fun grounds. The building is still in use and has the title of Vintage Hospitality Building. The group has maintained and staffed this building for some 30 years and they retain the title of being the host chapter for Sun ‘n Fun each year.

One of the first projects the FSAACA undertook was that of building an exact replica of the Laird LC-DW500 Super Solution. This type airplane is the one that then Major James H. Doolittle won the Bendix Trophy race flying from Burbank to Cleveland in 1931 at an average speed of 223 mph. The building project was completed after untold hours of labor by several members and subsequently donated to the EAA Museum in Oshkosh, Wisconsin where it remains on display today. As a result of this endeavor, later to become General James Dolittle decided to join the group and he soon became FSAACA’s most celebrated member.

VAA Chapter One has a very busy fly-in schedule each year. In addition to being the host chapter for Sun ‘n Fun they typically have 6-8 fly-ins at various locations throughout Florida and neighboring states. The fly-ins are usually hosted by another EAA Chapter and are very well attended. Members have a wide variety of airplanes including everything from antiques to classics to amateur built airplanes. The group publishes a regular newsletter with pictures of past events along with their upcoming schedule. The newsletter is called “The Scud Runner.” Their annual meeting is held during the Thomasville, Georgia Antique Fly-In which is usually scheduled in October. FSAACA is the oldest civilian continuous flying organization in the state of Florida and maintains a membership averaging 250 people. Members come from all over the world including Canada, England, Australia, France, Germany, and Italy.

FSAACA continues to be a very active organization. I would recommend that those of you who plan to attend Sun ‘n Fun this year stop by the Vintage Hospitality Building located where the antique and classic aircraft are parked. Say hello to the volunteers who work hard year round to keep this event going. You will also be able to walk through a large area of antique and classic airplanes that will be on display. Besides that, you will be able to wear a short sleeve shirt and shorts if you like. Enough of the cold weather – lets head south.

For more information on this active group of antiquers please visit their website www.fsaaca.org. You can also keep up with their schedule by viewing the Scud Runner online.