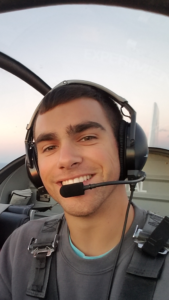 We have many young people who are very interested and active in aviation. I have written the story of a couple of very involved young pilots in recent e-newsletter articles. This month we will tell the story of a young man 22 years of age who lives in Grand Forks, North Dakota.

David Leiting has been interested in aviation as long as he can remember. He attended the 1994 EAA Fly-In Convention and has not missed a single year since that date. David is finishing up his final semester of college. He has been working this past summer as an intern for EAA. Upon his graduation from college, he will be moving into a full time role with EAA as the Chapter Outreach Specialist.

David is the only member of his family with an interest in flying. He took his very first airplane ride in a Cessna 150 in January, 2002. In 2003, he participated in an EAA Young Eagle ride in a DC-3. He is currently very active in the Young Eagle program having flown over 16 Young Eagles since he received his Private Pilot’s license. David took his first flying lesson at age 18 in a Cessna 172 while taking a flight course for college credit after deciding to pursue a college degree in aviation.

One of the obstacles we often hear discussed by young people regarding flying lessons is the cost. Granted, it can be very expensive to learn to fly. However, if you are determined you can always find a way. David is a good example.

David saved his money all through his high school years for flying lessons. He ended up saving enough to pay for more than half of his training. He had some help from his family and he also used financial aid from his school. This demonstrates if a young person has a burning desire to learn to fly that person will find a way. There are also a number of flying clubs located around the country that offer affordable aircraft rentals.

I asked David, “How would you suggest a young person who is interested in learning to fly proceed?” His answer – “with your parents help, research where you can learn to fly at an airport near you. If you find a flight school that is more financially desirable than another, take an introductory lesson to be sure you enjoy the environment. If you enjoyed the intro lesson keep in touch with a flight instructor to plan for future lessons.”

David has gone on to earn his tailwheel endorsement and his high performance endorsement. He is working on his instrument rating and complex endorsement. David believes that it is important to have an instructor who believes in teaching basic stick and rudder skills. During the learning phase he thinks the less technology in the cockpit the better. I will have to say I agree with him completely. There is no question in my mind that if at all possible a new student should learn to fly in a tailwheel airplane. They should learn to fly by feel or as is often said learn to fly “by the seat of your pants.”

In other words, you learn the very basics to begin with so that you are actually feeling everything about the airplane. After the initial instruction you can then have the instructor introduce the technology. As David states, “You can learn to utilize technology in an airplane fairly quickly, but it can be difficult to fly an airplane without it if you have first learned with it.” The moral of the story is learn to fly in a basic tailwheel airplane if at all possible. This is particularly important if you plan to fly vintage aircraft.

David is the current president of EAA Chapter 1342, located in Grand Fork, North Dakota. He volunteers at AirVenture each year and gives a number of Young Eagle rides throughout each summer. David volunteers at the North 40 parking and at the main gate admission during AirVenture. He has been an EAA member since 1998 and recently became a Lifetime Member. David’s objective is to work to support recreational aviation and to help make private flying more accessible to a larger number of people.

David has been fortunate enough to take part in several group fly outs. He recounted one in particular where he was part of a formation flight into the Minneapolis AOPA Fly-In at Anoka Blane Airfield. He and a friend were flying a Cessna 172 in formation with a buddy who was flying a Piper Warrior. They arrived in formation and upon departure they noted a Howard 500, P-51, and a Beech Staggerwing that were doing photo passes. As a flight of two they requested a photo pass down show center. Permission was granted and they followed the Howard and P-51 while the Staggerwing came in behind them.

David states that “…flying is the ultimate form of freedom. You can go where you want, when you want. It’s amazing when you get to leave all of life’s worries on the ground behind you and fly amongst the clouds.” David believes that EAA and Vintage should do everything possible to get young people engaged in flying. He also feels that once engaged they need to do something to keep them engaged. One suggestion he has is to provide a short ground school at no charge where they would introduce the basics of flying. I have no doubt that David will do his part to help achieve this goal as he joins the EAA as the Chapter Outreach Specialist. We will hear more about this young man and his achievements I am quite sure.