The only correct identification of the October Mystery plane—the Johnson Uniplane—was received from Bradford Payne. He wrote: 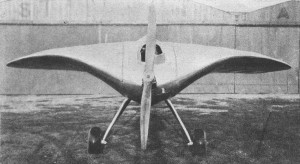 The October Mystery plane Is a Johnson Uniplane. It was designed by Richard B. Johnson of Chicago, IL. Mr. Johnson was issued U. S. patent #1,887,411 on November 8, 1932 for the airplane. One prototype was built (serial number UNPN-1), and was registered as NX13680 in 1934. It featured a blended Church mid-wing fuselage, circular flying wing, no horizontal stabilizer, conventional landing gear, and a single seat open cockpit. The Uniplane was powered by a 41 horse power Church Marathon J-3 in-line engine. The airplane had no ailerons (only rudders and elevators). The picture is from the original design which featured two vertical fins, however, at some point later the tail was changed to a single vertical fin from an Alexander Eaglerock.

More than 100 short (mostly straight) flights were made, but the Uniplane proved to be aerodynamically unstable and many flights resulted in crashes. In the summer of 1934, the airplane was offered as a flying ham advertisement for a Chicago meat packing company, but after a takeoff crash in August the idea was dropped. The Uniplane flew for approximately two years, and in 1936 after one final bad crash, Richard Johnson gave up on the Uniplane. It is interesting to note that there has been some remote control airplane models built based on the Uniplane design in recent years. Presumably they have had more luck than Mr. Johnson.

Below is a reprint of the article written by the Uniplane’s designer that appeared in the December 1936 issue of Popular Aviation in which he describes some of the problems encountered in developing this flying wing design.

by Richard B. Johnson

A recent and most interesting Chicago development with a single plane serving all functions of lift and control.

Among late developments in aviation is the low aspect-ratio airplane, sometimes called the “all-wing” or the “flying-wing” type. This specie of aircraft has been developed by several individuals independently of each other. Design conceptions took place before publicity on any one design, giving several original approaches to the same goal, a safer airplane. Dr. Snyder of South Bend and Raoul Hoffman were out first with the Arup, a half-circle planform wing. Then came Steven Nemeth of Chicago with his umbrella or pancake type, a true circular planform placed above a conventional fuselage.

A few months later the Uniplane, another Chicago design appeared ready for test flights. This conception appeared to be a cross between a pumpkin seed and a mud turtle, with apparent ancestral connections with the bat family. Of these three designs, the Uniplane was perhaps carried to the greatest aerodynamic extreme, having an aspect ratio of 1.1, which to the layman is the ratio between the wing span and the fore and aft wing dimension. This ratio is normally 6 on conventional airplanes, and anything less has always been considered inefficient and impractical. While admittedly inefficient, there is now a good deal of reason to believe it is far from impractical, for low aspect-ratio has one fundamental saving grace if no other-an inherent abhorrence toward breakdown of airflow at angles of attack twice what the conventional plane will survive. The significance of this airflow phenomena is of great importance, for it means relatively safe aircraft performance can be obtained without recourse to costly and complicated mechanical aids such as slots, flaps, and rotating airfoils, by the simple method of reshaping the wing planform.

As if this were not reassurance enough, the same redesign of planform gives virtually inherent spinproof qualities, with aspect-ratios below that of a true circle apparently absolutely spinproof according to available data. The above mentioned qualities, however, are not the sole ones to compete with so-called efficiency qualities of a conventional airplane; an efficiency incidentally which is inefficient in lives and material losses. Structurally, an all-wing type of construction is possible, resulting in a unified, compact aircraft, free from any possibility of serious major structural failure in the air. This same quality allows for lighter construction, greater available space, and greater proportionate payload. Aerodynamically, parasite resistance can be virtually exterminated, for the wing can house engines, cabins, and landing gear.

This advantage is cancelled to some degree by the greater wing resistance, which, however, is a favorable compromise, aerodynamically. Economically, it is cheaper of construction, less expensive for storage, and less expensive for flight instruction as landing skill requirements are considerably reduced. This economy is nullified to some degree by greater horsepower requirements.

From the standpoint of safety, a quality which should lead all others, this type of design can not be surpassed in a structural sense. Aerodynamically, only the autogiro lands slower and is safer against stalls and spins.

The above analysis is based partly on preliminary wind tunnel tests made by the National Advisory Committee of Aeronautics and partly on experience obtained from actual construction and flight tests of the single place experimental Uniplane.

This ship, its design, construction, and test flights have been a leisure time pursuit by a single individual, and its development has been handicapped by one mind, one pair of hands, and one meager income, which may account for its faults and unsensational performance .

Finished in September, 1934, the Uniplane made its public appearance with an oval or egg-shaped planform. The wing length or maximum chord was 16 feet and the span was only 14 feet, giving a wing area of 183 sq. ft. The 3 ft. thick center section enclosed a Heath fuselage which served as the major structural member.

A Church converted motorcycle engine was cowled into the wing. This engine was rated at 41 horsepower at 2800 r.p.m., but more than 2600 r.p.m. could not be expected of it when swinging a propeller of suitable diameter for the Uniplane’s requirements. This left no margin for reserve power, which accounts for the half-dozen forced landings experienced over the past two years . 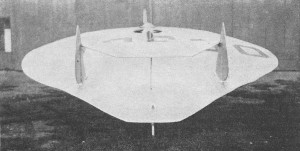 The cockpit, placed some four feet back from the leading edge, was entered by a rather precarious walk up the rear of the ship. This required a good deal more skill than actual flying of the Uniplane. Windows in the lower wing face gave visibility off to the sides and downwards. Straight ahead the visibility was poor for landing conditions, though fortunately depth perception and visual adjustment were not required other than for a sufficient knowledge that the landing area was clear, the Uniplane requiring no landing technique except for closing of the throttle, and trimming of the axes.

One of the more important features of the design, was the concave V bottom or dil1edral which plays a role, in this case, of control agent as well as the customary stability agent. The belief from the outset was that airplane control would have to be simplified before the cost of flying could be adjusted to the general public’s pocketbook. The low span of the Uniplane made it seem advisable and possible to do away with ailerons entirely, and use the principle which gives a V-bottom speed boat favorable banking moments in a turn or when yawed.

Thus, the Uniplane was considered a boat in air rather than water. Results have justified this highly experimental and even dangerous attempt to make flying more practical, the only period of control difficulty and resulting accident being during the trial of experimental ailerons which were added after continued warnings by experts against such a foolish idea as having no ailerons.

To be sure some trouble was experienced at first by a lag between rudder action and dihedral response which caused overcontrol. This was remedied by removing the entire original twin rudders and floating elevator, the latter being inadequate at high angles of attack, and trying a half-dozen types of rudders until a balanced rudder without stabilizer was found to give the desired control, the stabilizer being the cause of the lag.

Subsequently, flights in rough air showed an undesirable rolling trait which created a tendency to overcontrol, and also showed difficulty in making left turns against engine torque. A vertical stabilizer or dorsal fin over the center of gravity proved to remedy both problems. It is interesting to note that this arrangement is the same as on racing boats such as outboard racers which have a small hydro fin slightly forward of the center of the bottom.

To replace the floating elevator, the two trailing edge ailerons were hooked up to work together as elevator only, and have served the purpose well, having an extra stabilizing influence while the ship is landing in its customary pancake style, the diagonal, at which they are set, creating a dihedral effect when in the up position.

Here we see the cockpit and the disposition of the horizontal surfaces. The horizontal flow of air is not interrupted from the leading edge to the extreme rear edge of the surface.

Further conventional instruction did not seem advisable because of the difference in control systems, and the danger of forming conflicting habits and responses, a premise which appeared correct when the transport pilot experienced difficulty in adapting himself to the feel of flying without rudder pedals to “kick” in emergencies. So, it is no doubt correct to assume that this two-control system will be easier to master by the new student than by the experienced pilot.

The two successful flights consisted of a four-mile hop around Harlem airport at an altitude of 100 feet, and an eight mile flight at 250 feet in extremely rough air which the Uniplane does not like very well because of its too light wing loading. Of greater importance and significance than the successful flights, were the unsuccessful flights or the forced landings; for it was these that demonstrated the ability of the Uniplane to land almost anywhere an autogiro could be expected to safely set down, the landing rolls measuring from 200 feet close to three ships’ lengths, though in every case the engine was kept open to its maximum dying revs. until just before ground contact.

A backyard, a cabbage patch with only one cabbage fatality, and the windward side of telephone wires were several of the spots at which flights were terminated. The average landing speed is estimated to be under 25 m.p.h.

The maximum angle of stall on the Uniplane appears to be around 40 degrees, an angle which it no doubt has achieved many times though there has been no tendency for it to fall off on one wing or start a spin. Even at such a high angle lateral control remains available, rudder action being sufficient to yaw the ship and set up the dihedral reaction.