I received a call one morning from Evan Haskell asking if I could teach him how to fly a pristine Beaver he and his father had recently purchased. Evan added that although he had quite a bit of time, it was mainly in a Cessna 206 on amphib floats. He also would need a tailwheel endorsement. He and his father had plans to find a set of amphib floats for the Beaver. While looking for the floats, Evan reasoned it would be a good time to learn to fly a taildragger and get a tailwheel endorsement as well.

I suggested instead of starting in the Beaver, we first get him proficient in my Citabria. With its spring steel gear and lightness, it would give him a great foundation in flying taildraggers. He agreed and, to my surprise, Evan turned out to be one of the finest students I have ever had. Within a couple of hours he had mastered three point landings, wheel landings, and yes, bad landing recoveries. He learned the fine nuances of keeping the plane straight down the runway, allowing for no yaw or drift on landing, with quick and responsive reaction on the stick and rudders. He remarked how much it improved his basic takeoff and landing skills. We went on to master crosswinds and dead stick landings–three point and on wheels. We worked on short, soft, and short-soft field landings. Within five hours Evan had mastered everything I could teach him in the Citabria. I happily gave him a tailwheel endorsement.

It was time to transition to the Beaver. 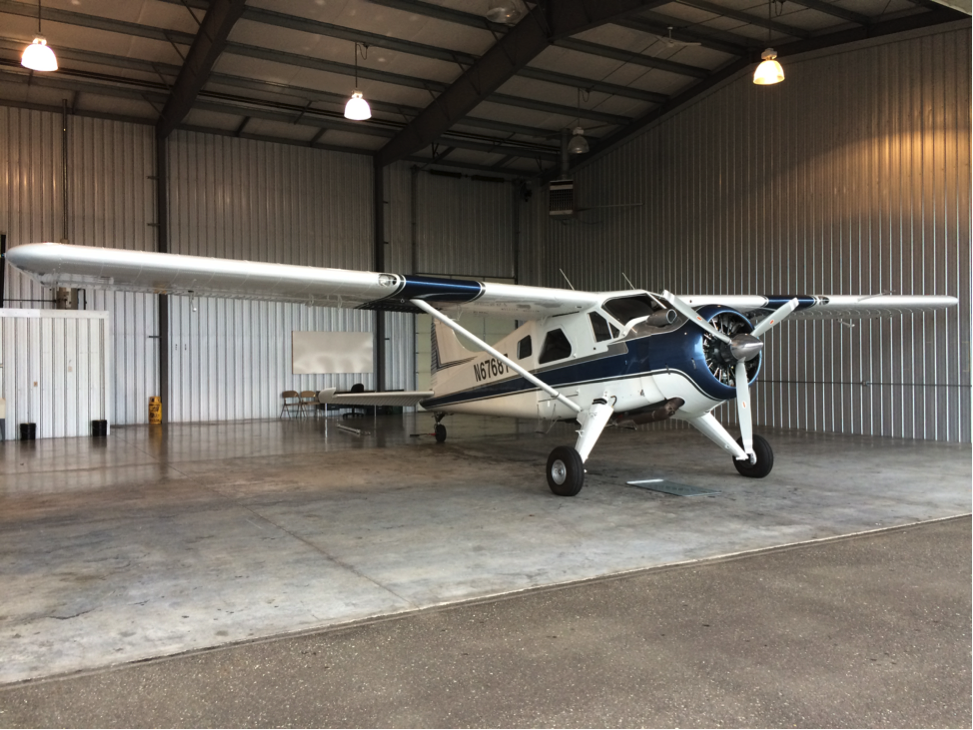 There was one small wrinkle. It had only a throw-over yoke. It did have rudders and brakes on the copilot’s side. Finding and installing a dual yoke turned out to be nearly impossible. Dual yokes are hard to come by, expensive, and difficult to install. So what were we to do?

The good news was I was familiar with Beaver N67687. I had flown it many times for Northwest Seaplanes from Lake Washington to Hakaii Lodge and Rivers Inlet in British Columbia and back on a daily basis. The company sold it restored to better than new and after one previous owner, it found its way into the Haskells’ hands. The bad news was I could not find anyone who had a Beaver on wheels with dual controls to teach Evan how to fly a conventional gear Beaver. I called everyone and anyone I could think of. I had Shane Carlson from Northwest Seaplanes searching high and low. I struck out.

I called Don Jeffries, another fine pilot I had taught to fly in a Beaver with a dual yoke. 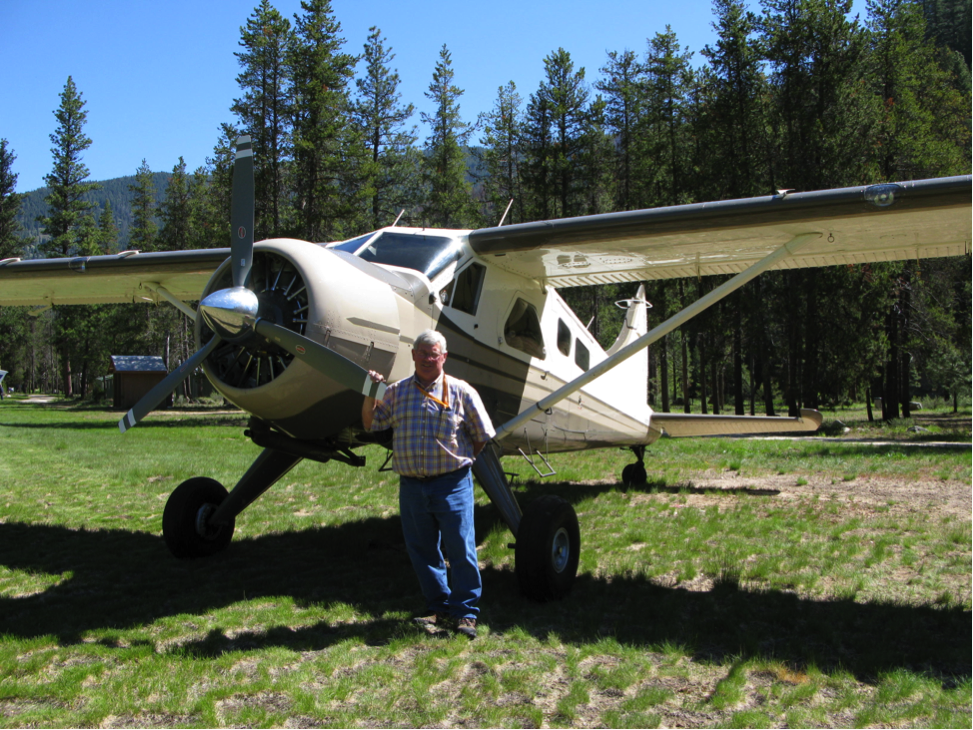 Don Jeffries standing next to his Beaver at Johnson Creek, Idaho.

Don had purchased a like new Beaver restored by Kenmore Air and needed a tailwheel endorsement and a 25 hour checkout to satisfy his insurance company. Like Evan he had lots of time (in this instance a Cessna 210) but no tailwheel experience. Don turned out to be a quick study as well and within ten hours he was quite proficient in the Beaver. The other 15 hours really polished him off. Unfortunately Don had sold the Beaver and it was not available.

Pretty much stranded I wracked my brain to get Evan checked out while he continued searching for floats for 687. Since no dual control Beavers on wheels were to be found, I started thinking about like airplanes. A T-Craft would be okay. There are plenty of them around. They have dual yokes instead of a stick like the Citabria. However, they are simply too light to consider for similarities training in regards to a Beaver.

Buck Johnson came to my rescue. Buck had a Stinson 108 with dual controls and a 180 horsepower Lycoming in it. I had taught him to fly in it. Again I was fortunate to have another very talented student. Buck had no experience whatsoever in airplanes. He was an excellent student. When an examiner calls you to tell you how well the student did for his private pilot checkride, it means much more than the piece of paper certifying he is now a pilot. Buck was a pleasure to teach and turned out to be a very trusting friend. I explained my predicament to him concerning Evan’s Beaver and its not having dual controls. After much deliberation I had reasoned that the Stinson 108 was the closest thing I could get to the Beaver. That may seem a big stretch. 450 horsepower verses 180 horsepower? Over 5000 pounds gross weight compared to less than 2000 pounds? Constant speed prop verses fixed pitch prop. Big radial engine in front rather than a flat opposed? 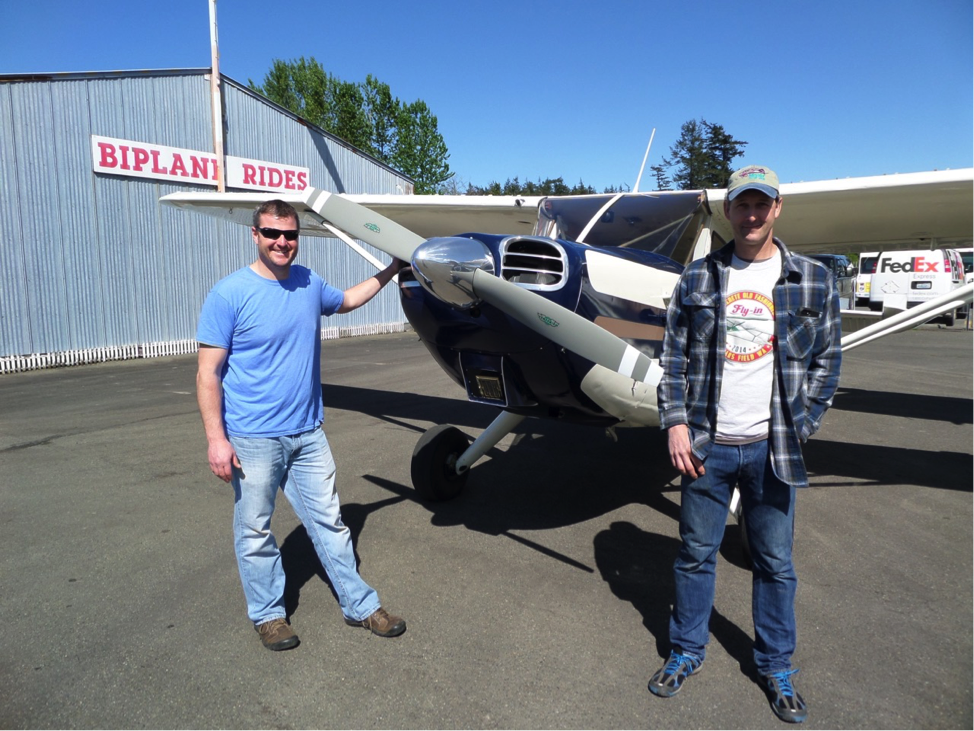 Maybe not, but the more I thought about it, it began to make sense. A Beaver is surprisingly light on the controls – very similar in feel to that of a Stinson. Buck’s Stinson had gobs of power which would require Evan to deal with p-factor in a big way. Better use right rudder on takeoff big time in either plane. The Beaver is slightly higher off the ground than the Stinson but not that much. The view over the nose is better than one would expect in a Beaver on wheels, a little better in fact than the Stinson – far better than my Fairchild 24 with a Jacobs engine. The feel of the landing gear is also a plus. Although different in design, the two landing gears behave similarly in terms of “bounce and settling down.” The approach and landing speeds are pretty similar. Both have flaps. Both are unforgiving if the pilot gets behind the plane. Both must be flown attentively and taxied to a stop before the flight is complete. The more I thought about it, the more I convinced myself it would work.

I apparently convinced Buck as well. He graciously agreed to my using his plane to get Evan as familiar as possible to the quirks of flying a large taildragger with his much smaller airplane.

To his credit, Evan made the transition even easier. The time in the Citabria served him well. Within a couple of hours in the Stinson, he had complete control of wheel and three point landings. Now on to phase three.

With Evan in the left seat of the Beaver, we “threw” the yoke over to me in the right. We would takeoff, and climb to altitude, “throw” the yoke back over to him and give him air work. We simulated takeoff and landing as best we could at altitude. We got him used to power and prop settings on the R985, configuring the Beaver for landing and takeoff, flying slow, steep turns, stalls, go-arounds, x-wind takeoffs and landings, the usual. As I recall the insurance company had surprisingly set the low bar of only ten hours dual and a tailwheel endorsement for Evan. Since Evan’s plan was to eventually fly 687 to Minnesota for amphib floats, we spent some time doing high altitude work so he would be familiar with power settings and performance when crossing the Cascades and Rockies. This air work not only provided him with the ten hours, but also got him familiar with advanced procedures in the Beaver.

After that I demonstrated takeoffs and landings from the right seat, so Evan could get used to what it would look like from the left seat, again and again. He was doing so well in the Beaver and had learned so quickly in the Stinson and Citabria, I decided the moment had come. We had a long ground session on differences. For the first time Evan had the yoke in his hands for takeoff and landing. I only had power, rudders, brakes, and flaps and the ability to talk fast (I hoped). To make a long story short, Evan’s first takeoffs and landings were non-events. With the skill and dexterity gained in the Stinson, he flew the Beaver as though he had been flying it for hours. Soon I was quite comfortable sitting in the right seat without having a control yoke. 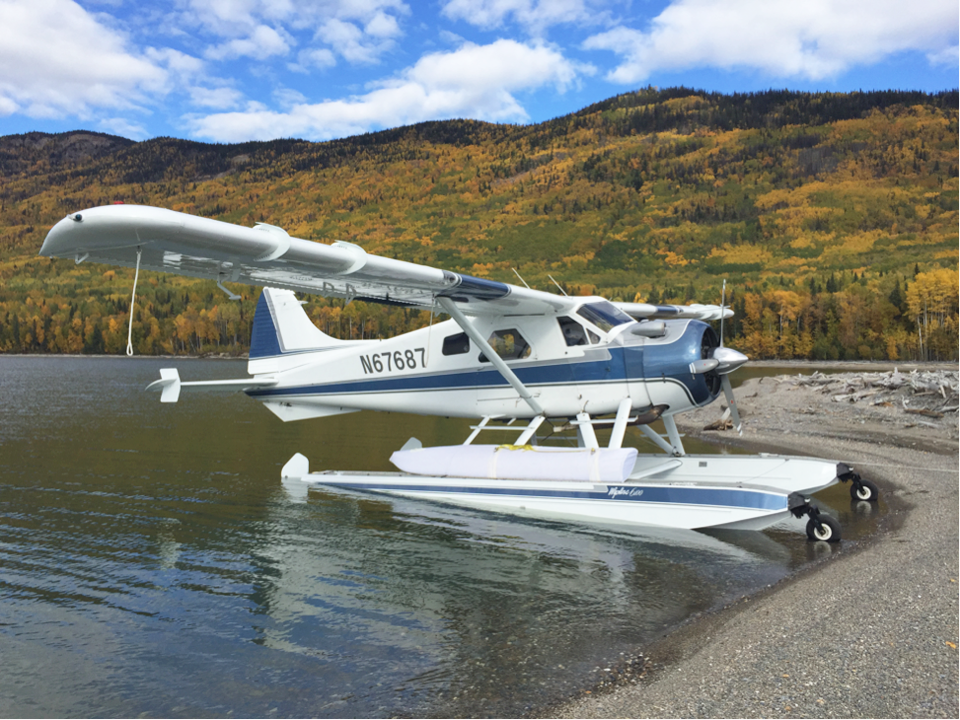 Evan’s Beaver on amphib floats making a pit stop at Williston, B.C. on the way up the Trench

To be sure, this was a pretty creative and perhaps crazy way to get a non- taildragger pilot trained to fly a large taildragger. I only offer up the experience as something to consider in checking out pilots in challenging aircraft. It’s a little bit like trying to check out a homebuilder of a single seat RV-3, who has never flown a tailwheel airplane before. Try to give him/her as many similar experiences as possible, make sure the pilot is fully competent, and then go for it.

To Evan Haskell’s, Buck Johnson’s, and Don Jeffrie’s credit, they are outstanding pilots. That certainly makes the instructor’s job much easier. Evan now has 687 on amphib floats.

They are a credit to aviation – great pilots doing everything the right way. I was merely along for a good ride.