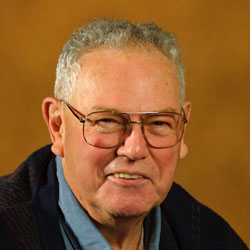 Buck has been there since the beginning of the Division, one of the originals who asked Paul Poberezny if it would be possible to park all of the antiques in one place during the EAA Convention. “Sure, as long as you supply your own manpower!” was Paul’s response. Buck had been a longtime enthusiast for old airplanes, a restorer who still has the Aeronca C-3 he restored in the 1960’s. Many members will recall the Swallow TP Buck rescued from the top of a garage in Chicago, which he used as the “wake up” airplane for many Conventions, until he donated the airplane to the Seattle Museum of Flight, where it is now on display.

Buck served as the Division’s first president, filling that position from 1971-1974. He currently serves on the A/C Board as Treasurer, and he also serves on the EAA Aviation Foundation Board of Trustees. Buck’s early days of aviation started as a line boy at the old Elmhurst Airport southwest of Chicago, and eventually led him to a career in the U.S. Air Force, where he served in the Training Command. He also served as an Army aviator during the Korean War, where he flew liaison missions on Stinson L-6’s. Buck’s civilian career led him to United Airlines, where he retired as a Captain in 1986.

Our congratulations to Buck upon his induction into the EAA Antique/Classic Hall of Fame.