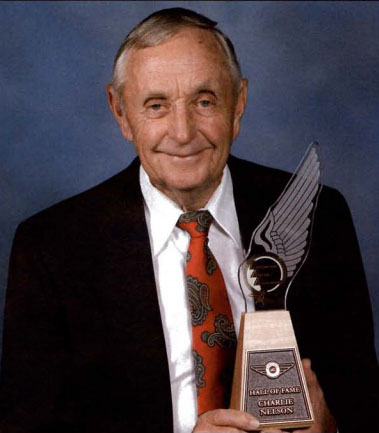 Born into a tenant farming family in 1931, Charles E. Nelson became interested in aviation in grade school, when a )-3 Cub landed near his Euchee, Tennessee, school to wait out some bad weather. While his father plowed the fields of the Tennessee River bottomland, 7­ year-old Charlie was whittling model airplanes from cornstalks. Growing up during World War II, he developed an interest in all things mechanical and electrical. By 1949, 18-year-old Charlie had volunteered for a three-year Air Force enlistment.

As an airman, he was sent to Airborne Radio Operators School, where he received his Amateur Radio license “W4RST,” which is still current today. After graduation from Keesler radio school he was assigned to SAC at Carswell AFB, Fort Worth, Texas. While at Carswell, he was tasked to build and maintain a Military Amateur Radio Service station, which he did until the Korean War saw him reassigned to a communications base in England, where he learned to decode Russian weather reports.

After a one-year extension of his enlistment, he was honorably discharged and found himself at work in Tulsa, Oklahoma, at Douglas Aircraft in the electrical development department. A return home to Tennessee led him to work with the phone company. In 1955 he was involved in dirt-track racing, both as a backer and as a track announcer, money that would eventually be used in part to buy his first airplane. He also found time to get married ad was blessed with his daughter, Pam, who works with her father as the secretary of the Swift Association office.

A lifetime of business ventures with his partner, David Boyd, included ventures in a campground, sub-division development, and cemeteries.

While in involved in business in Ardmore, Oklahoma, Charlie enrolled in an “American Flyers” pilot school, the only American student in a classroom full of Afghani student pilots. After soloing a J-3 Cub, in 1961 he bought a Luscombe 8A. Later, he bought an airplane salvaged from the Tennessee River, the airplane to which he’d become indelibly linked- A Swift. He later sold the Luscombe to another VAA Hall of Fame inductee, Jack Cox, and his wife, Golda.

Charlie’s interest in aviation continued to take root, and he attended his first EAA convention in Rockford in 1964. He hasn’t missed one since.

His early visits to the EAA convention convinced him that the owners of Swifts needed a way to communicate with one another. While flying home in his second Swift, he developed a plan of action and placed a two-dollar ad in Trade-A-Plane. The International Swift Association, which later became the Swift Museum Foundation, quickly grew to 800 members, and continues to serve aviators who have an abiding love for the Swift.

Over the next 37 years, Charlie and the Swift Association have acquired the Swift Type Certificate, negotiated with the Saudi government to acquire and restore what became the only remaining Temco T-35-A Buckaroo, and celebrated the 50th anniversary of the aircraft with a reunion fly-in, which featured a reunion of Temco employees, including past Temco President Bob McCulloch.

By the end of the past century, under the leadership of Charlie Nelson and with the help of his volunteers and small staff, the Swift Museum Foundation has its own headquarters building, a parts department to supply parts to Swift owners, and its own museum, and is once again working with manufacturer to build new aircraft based on the Swift’s design, as well as make replacement parts for the Globe/Temco Swift.