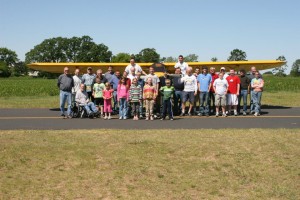 “We don’t build airplanes with kids. We build kids with airplanes.” That is the slogan of the group we are presenting in this month’s vintage airport feature. The airport where this organization is located is the Palmyra Airport in southeast Wisconsin and the designator for the field is 88C. This is truly a grassroots effort that is making a difference in the world of aviation. The name of the group of dedicated volunteers is 88Charlies, Inc. named after the airfield. 88Charlies Restore a Plane Foundation is a non-profit organization dedicated to promoting aviation by giving students the opportunity to restore aircraft. They believe that aircraft restoration construction projects provide an exciting opportunity to motivate students to learn the facets of science, technology, engineering, and mathematics when applied to this program. Five individuals are responsible for the formation of 88Charlie, Inc. They are Steve Sorge, Mike Rosman, Bill Rosman, Dave McCoy, and Al Borre. 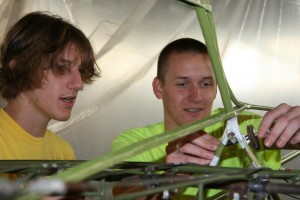 The goal of the group is to get young people between the ages of 12-18 involved in restoration projects and flight lessons. The participants are offered flying lessons in exchange for work on aircraft. 20 hours of work earn the young people 1 hour of flight time. Their restoration focus is on lower horsepower antique and classic aircraft such as a J-3 Cub, Taylorcraft, etc. The group was formed in October, 2009 by the five like-minded individuals mentioned. They believe that young people are excited by airplanes and that aviation will offer them a real-world reason to pursue a career involving science, technology, engineering, and/or math. Local schools are always in search of new ways to introduce students to core learning skills and to offer an insight into alternate career paths. They also rely on the efforts of a large number of volunteers who assist the young people with the restoration projects. They realize that there are a large number of young people who would love to have the opportunity to be exposed to aviation as a vocation. This is something the group does very well.

The club currently owns and operates a Citabria and a Taylorcraft. Other projects include a Helton Lark 95, Porterfield 75C, Piper Pacer PA20, Piper Tri Pacer PA-22, and a Fairchild F24. A number of the volunteers also own aircraft that are used for orientation, rides, and flight instruction. 88Charlies is a 501 c 3 non-profit corporation that accepts project donations. They have no shortage of offerings of projects. In addition to the aforementioned list of projects, the group is currently working on a Taylorcraft project that will be sold with the funds being used to subsidize their program. They recently completed a Piper PA-11 from beginning to end for another person. The majority of the work is accomplished on Saturday with some scheduling taking place through the week. Typically they will have 15-20 kids show up each Saturday along with another 10-15 volunteers who act as mentors for the young people.

A local company has been instrumental in providing a place for the restoration of the projects. They have donated the use of one of their facilities located near the airport. It is a 40 x 60 ft building that also has a paint booth. 88Charlies is also in the process of building a heated hangar thanks to this company’s contributions and from a key private contributor. 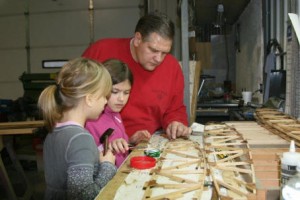 Fund raising is a challenge for 88Charlies like it is for all non-profit groups. One way they secure funds is through barnstorming. They have an agreement with a local farmer who owns an 1800 ft airstrip right next to a busy highway. They can draw passengers from the highway traffic and on a typical barnstorming day they will fly from daylight until dark charging $30 per person. They rely on gifts and also on selling projects that they have restored.

They also know that there are large numbers of un-airworthy aircraft and incomplete kit planes that are good candidates for their restoration projects. They are normally available at a small cost or they are donated.

I am very impressed with this group of aviation enthusiasts. While a lot of people talk about directing youth toward aviation and teaching them aviation skills, this group quietly marches forward and achieves their goal. No fanfare, no assistance from large groups, just a dedication of a few people who want to see young people succeed and who want to see vintage aircraft continue to be restored and fly. They are certainly making a difference in young people’s lives. Their leaders told me of several success stories – youth who have gone on to aviation careers because someone took the time to introduce them to aircraft and the aviation career paths that are available.

If you are in this area please stop by and visit. Located on the airport are several antiques and classics including a Stearman, Piper Clipper, Piper J-3, and a Porterfield. You can find more information on 88Charlies by going to www.88charlies.com It is also noteworthy that on the 2012 issue of the Wag Aero catalog you will find a group picture of the people involved in this organization.

Author Note: Those of you who have been following Vintage Airmail the past several months are aware that we feature an airport each month that is making a difference in the antique airplane world and the world of aviation. This section is called “Airport Action.” This is a good title for the feature because the airport that I feature in each issue is one that is taking action. We are all aware that unless we pass on our interest in antique airplanes to younger people it is unlikely these old airplanes will survive to the extent we would like. I would like your help in locating so-called “action airports” so I can feature the group of people who are responsible for the action. After all, the articles are about the people that make things happen and the ones who create the airports and the needed atmosphere to foster antique aviation. If you are aware of an action airport that is truly making a difference please email me at ronalexander@mindspring.com.