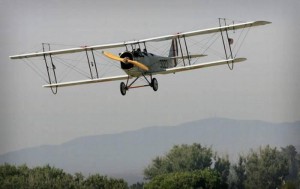 A highlight of each issue of Vintage AirMail will be to focus on one of the many antique aircraft havens that exist throughout the country. There are numerous airports that provide a home for a large number of antique and classic aircraft. One such airport – and the first to be featured – is Flabob Airport located in Riverside, California. Flabob is touted as the “Little Airport That Time Forgot.” Flabob is the seventh oldest surviving airport in California. It was founded in 1925 as Riverside’s first civil airport.

The original Riverside Airport was washed away during a flood in 1938. A few pilots who stayed moved their airplanes a few hundred yards downstream where a leftover WPA tool shed provided some shelter. They were able to house their airplanes in that tool shed and fly off of a makeshift strip. The location of this shed is now home to Flabob’s Hangar One.

In 1943, the strip that remained was purchased by Flavio Madariaga and his partner Bob Bogen. Madariaga was a world class “scrounger” who could make or build just about anything and Flabob airport is literally the product of his mind and hands. The little airport was initially called “Riverside” airport until emergency crews responding to a crash at Riverside Arlington airport came to it by mistake. In response to this problem Flavio Madariaga and Bob Bogen combined the first letters of their first names to come up with “Fla Bob”. The airport today is known simply as Flabob.

Flabob was home for the famous movie pilot Frank Tallman. Aerobatic great Art Scholl started at Flabob gaining his title “Professor” from his work teaching for San Bernardino Valley College. The airstrip was also home for a number of pioneer aircraft designers such as Ray Stits, Ed Marquart, and Lou Stolp. And of course Bill Turner’s Repeat Aircraft built replicas of many famous racing airplanes including the deHavilland Comet, the Roscoe Turner Meteor, and several GeeBees.

One of the most notable beginnings on Flabob was that of EAA Chapter One. In 1953, shortly after Paul Poberezny founded the EAA, he invited Ray Stits to join. Ray was certainly agreeable but thought it impractical to try to go to Milwaukee for meetings. He asked Paul if he could organize a chapter of the EAA and locate it on the Flabob Airport. The rest is history – Ray Stits organized EAA Chapter One that remains very active on Flabob to this day. Ray also housed his famous fabric company on Flabob – Stits Poly Fiber Covering System. The company has new owners today and is simply called Poly Fiber Coatings. The facility continues to operate out of Flabob manufacturing the premier fabric covering systems for all aircraft including antiques and classics.

After the death of Flabob founders Madariaga and Bogen, many pilots and aircraft owners began to drift away. A core group remained but activity was slowed considerably. Finally, the airport was put up for sale.

In 1999, Tom Wathen retired as chairman of Pinkerton’s, the international security and detective firm. Tom set out to devote his time and resources to charitable activities. Tom had a special interest in aviation education and preservation. It became apparent to him that he needed a “campus” where teachers, volunteers, and young people could get together. On May 31, 2000, the Tom Wathen Foundation completed its purchase of Flabob Airport. A number of major improvements have been made to the entire airport. The runway was resurfaced and widened, hangars were erected, and a large new hangar for EAA Chapter One was built. The airport is now an active center for vintage aircraft enthusiasts and for amateur aircraft builders. It is also home for a public charter school, Flabob Airport Preparatory Academy. Future expansion is underway with emphasis on aviation education.

Jack Pelton, current acting president and CEO of EAA, is a lifelong EAAer with extensive flying experience in all types of airplanes from experimentals to warbirds to business jets. Jack grew up in an aviation family in Southern California. His father, who flew in the U.S. Army Air Forces during World War II, was active in EAA Chapter 1 at Flabob Airport in Riverside, California. Among the airplanes his family owned was a Cessna 140A, the final version of the popular taildragger that had the single strut and tapered wing. Jack’s mother was also a certificated pilot.

Last year in September Flabob was host to a major antique airplane event. The airport hosted the very first annual “Flabob Flying Circus.” I had the pleasure of attending the event and flying the DC-3 “Flabob Express” in the circus. It was a great event – one that will be repeated again this year. The Cavalcade of Flight lasted nearly four hours, involved about 75 aircraft and held everyone’s attention from start to finish. The turnout was large and enthusiastic. It was like a parade, a parade of antique airplanes going back to the Wright Flyer and progressing up through the DC 3. A Curtiss Jenny, JN-4h, did its long takeoff roll on the grass strip. It set the stage for the flights to follow, circling three times in an oval pattern before landing back on the strip. 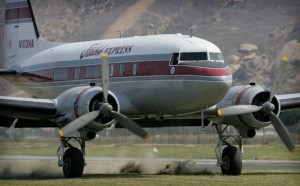 There followed a fascinating series of Travel Airs, Wacos, Howards, Fairchilds and even a Buhl Pup. There were trainers: variations on the Ryan PT-22, and Fairchild 19s, 23s, and 26, followed by Stearmans and an N3N. There was a Stinson SM-1, the only surviving example of the first passenger plane. It had been flown over from Valle Airport at the Grand Canyon. What a spectacular day and what a great gathering of vintage aircraft. I highly recommend that you mark your calendar for this coming September 26-29, 2013. The Cavalcade of Flight will occur on Saturday September 28th. For more information on this event and on Flabob Airport please go to www.flabob.org. Also, for information regarding this year’s Flabob Flying Circus go to www.flabobflyingcircus.com (they will update it soon for the 2013 event.)

NOTE – tell us about your special airport that is home to vintage aircraft. You may have big events or a small group of people, we’d like to hear about it. Please click here to email Ron Alexander.